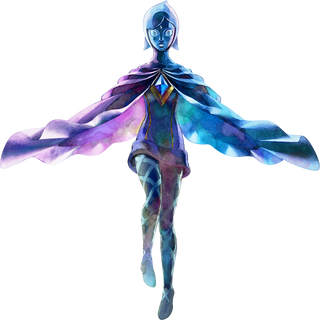 Fi is a recurring character in The Legend of Zelda series.[6] She is a humanoid spirit residing inside the Goddess Sword,[7] enlisted to guide Link during his adventure.[8]

The goddess Hylia created the Goddess Sword and Fi, an intelligent humanoid spirit who resides in the Sword, and gave them the purpose of assisting Hylia's Chosen Hero in fulfilling his destiny of defeating Demise.[9][7] She then enshrined the Sword inside the Statue of the Goddess before raising it into The Sky as part of Skyloft. Preceding the Wing Ceremony, Fi appears to Link in his dreams, foretelling his destiny.[10] After Link and Zelda are attacked by a black tornado, Link wakes up in his room, where he hears Fi speaking to him. Fi guides him to the Statue of the Goddess, further explaining his fate as the chosen hero and encouraging him to draw the Goddess Sword from its pedestal so that Fi can formally acknowledge him as her Master.[11][12][13] Fi gives Link the Emerald Tablet and tells him that he must go beneath the Cloud Barrier in order to find Zelda and fulfill his destiny,[14] with the Tablet activating a Column of Light illuminating the path through the Cloud Barrier.[15]

Once Link seals away Demise within the Master Sword, Fi requests that Link end their relationship by returning the Master Sword, as her purpose in aiding the chosen hero in his mission is complete.[16] Link thrusts the Sword into its pedestal in the Temple of Hylia, but Fi calls him back to give a true goodbye, showing emotions for the first time and claiming that their time together was the most precious, for she had experienced happiness before falling into an endless sleep.[17] She then thanks Link and hopes that they may meet again in another life as her consciousness fades away into the Master Sword.[18]

Although Fi does not appear in person in Breath of the Wild, she is referred to several times and speaks to Zelda on one occasion.

When Zelda questions Link's skill with the Master Sword, she refers to Fi indirectly, saying that legends tell of a voice within the sword and asking if Link can hear it.[19] After Link is nearly killed fighting off the Guardians controlled by Calamity Ganon, Fi speaks from within the Master Sword - signaled by the Master Sword glowing and their sound effect playing - and tells Zelda to take Link to the Shrine of Resurrection.[20][21][22]

In the end, Zelda mentions that she can no longer hear the voice inside the Master Sword, assuming it is because their power has dwindled over the past 100 years, yet she accepts that.[23]

After completing the Trial of the Sword, while Link is observing the new power unlocked within the Master Sword, Fi's sound effect plays and the Sword glows once more.

Like her fellow Sword Spirit, Ghirahim, Fi possesses psychic abilities, specifically telepathy. Throughout Link's journey, she aids the hero by providing him with information about the area he is in, the enemies he is facing, and even messages directly from Hylia to Link.[24] Fi can be talked to when Link is traveling on foot by pressing down on the D-Pad of the Wii Remote.[25] When this is done, Fi will give Link various options to choose from, providing the play time of the current session, the current objective, and advice as to what he should do next, which include a summary of the past few events as well as hints and rumors.[26] In addition, Fi will give Link a basic description of a targeted enemy and its weaknesses. Fi will also tell the hero how many times he has defeated any type of enemy and gives an indication of Link's proficiency in fighting a specific type of enemy.[27] When this is used on Bosses, Fi will usually give a limited supply of information about the enemy's weaknesses. If Link is defeated in the battle, and Fi is once again asked to give advice, more information will be available. Other than enemies and bosses, Fi can also scan people, Bugs and locations. Fi can telepathically talk to people and robots and sense people's auras.[28][29]

Fi also has a treasure-seeking ability called Dowsing. It can sense important people and items and help Link to locate them, acting as a sort of compass.[30] When Link needs to locate a certain person or item, Fi will add a Dowsing option accordingly. He can then choose in the Dowsing menu which specific object or person he wishes to track down. In Dowsing mode, pointing the Sword in the general of the target will cause it to beep, which becomes faster as Link approaches the target.

Fi also informs Link when his Hearts have nearly depleted,[31] and will eventually add them as Dowsing targets.[32] If Link's Shield is about to break, she will warn him of this and caution him to take care of its remaining durability.[33] If the Wii Remote's batteries are "nearly depleted", Fi will call attention to them.[34]

Fi follows in the tradition of past Link companions by translating messages for Link; in her case, these messages are from the gods of old. Whenever Link hits certain Goddess Crests with a Skyward Strike, a message intended for Hylia's Chosen Hero will awaken deep within Fi's memory.[35][24] Fi will translate the message for Link while dancing and skating around the room until fully delivering the statement. She will also dance along as Link learns the three songs inside the Isle of Songs. Similarly, playing the Goddess's Harp at points needed to advance in the game will cause Fi to sing along the melody.

After helping Gondo fix Scrapper, Fi is able to persuade the Ancient Robot to assist Link by carrying various items from the surface up to The Sky. Should Link need the assistance of Scrapper, Fi will call Scrapper using telepathic transmission and ask him to transport it above the clouds.[36]

Fi's voice is made up of gibberish with a synthesized tone, emulating a real language. Her style of speech is also emotionless and robotic,[13] and she has a propensity for providing statistical percentages for various conditions.[37] Curiously, Fi has an innate inability to comprehend human emotions despite being capable of detecting them.[38]

Fi refers to Link as her Master, having recognized him as the Chosen Hero to complete Hylia's mission.[39][13] Despite her initial lack of emotion, she develops a subtle friendship with Link, learning to cherish the moments they spent together and thanking him before she enters an eternal sleep into the Master Sword.[17][18]

In Hyrule Warriors, Fi's personality changes very little, although she seems to be somewhat fiercer, fighting alongside the other characters against enemy troops.

Fi appears as a playable character in Hyrule Warriors. She does not wield a weapon in battle, as she the Goddess Sword itself. Her fighting style is very elegant, and resembles ballet dancing, using her legs and feet to deal damage. She is capable of turning into the Goddess Sword for her attacks, and summoning the Sacred Flames. Fi has great mobility and crowd control, constantly moving with her attacks and has wide, sweeping blows that have no difficulty hitting multiple foes at once. However, she does suffer against boss characters due to lacking a sufficient aerial or weak point smash move.

Fi first appears in the Land in the Sky Scenario, where she asks Link to come to the Goddess Statue. Recognizing that this Link is not from their time period, she still choose to ally herself with him, calling Link "Master." In Sealed Ambition, Fi assists in defeating The Imprisoned and Ghirahim on the Sealed Grounds.

When fought as an enemy Warrior, Fi occasionally drops the Fi's Heels Silver Material when defeated, and rarely the Fi's Crystal Gold Material.

In Super Smash Bros. for Wii U, Fi appears as a Trophy.

In Super Smash Bros. Ultimate, Fi appears as a Spirit with the ability, Neutral Special Up, which raises the attack power of neutral special attacks.

Developmental artwork of
Fi from E3 2009

An early design for Fi drew inspiration from the Fairy Queen from The Wind Waker,[40] and depicted her with a grayer aesthetic. This design was used as the basis for her final appearance, which also incorporates design elements of the Master Sword itself.[41] Most of Fi's body is purple, like the Sword's hilt, though Fi's legs share the green straps adorning the hilt, and the rest is a bluish-white, like the blade. The upper part of Fi's cloak resembles the Goddess Sword's crossguard. According to Hyrule Historia, Fi is meant to appear between 13 and 14 years old.[42]

In contrast with her final design, the base of her dress from her E3 2009 design was initially segmented and there were significantly more green lines strapping her legs. She also had a collar, which was removed in favor of a line bisecting her cloak-like wings, leading down to the diamond adorning her chest. This diamond was originally much smaller and situated lower down, on her solar plexus. The golden lines flanking the diamond were also moved further apart in her final design, no longer converging at the sides of the diamond. The ends of her wings were initially pointed, ultimately becoming round and frilled in the final design.

Fi's name could possibly be a reference to the commonly-used abbreviation for fidelis, Latin for "faithful" or "loyal".