Felicia is a Fairy that appeared in the Link's Awakening manga by Ataru Cagiva.[citation needed] 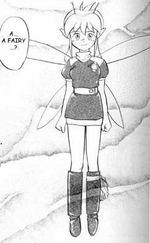 Felicia as shown in the manga

Although Felicia appeared to be headstrong, she was in fact a very caring partner towards Link. She was unwilling to tell him the truth of what the Wind Fish awakening would bring, as she feared his reaction, but when Link eventually found out, he was forced to accept it, and so continued on his quest to awaken the Wind Fish regardless.

Felicia's job throughout the story was not only to accompany Link, but to take care and hold onto the Instruments of the Sirens while Link went about finding them.

Felicia's relation to Link is quite similar to the one that Tatl had to him; although cheeky and condescending at first, she eventually became a close and dear friend to him. Unlike Tatl, however, the relationship between Felicia and Link seemed to be to the point where she might almost be considered a love interest, if Marin had not been present. However, like Navi and Tatl, Felicia's partnership with Link was not to be a permanent thing; when Link finally succeeded in awakening the Wind Fish, she, too, vanished, with the rest of Koholint Island.

Felicia is a derived from the Latin word Felicius and is the feminine form of Felix,[1] which means "successful" and "lucky".[2]