"Its lightweight design is a hallmark of Rito craftsmanship. It's made from light and sturdy materials, which afford Rito warriors ease of use during aerial combat."
— Hyrule Compendium

The Feathered Spear is an item in The Legend of Zelda: Breath of the Wild. It is a Rito Spear with a lightweight design made of light and study materials by Rito craftsman, allowing it to be used by Rito warriors during aerial combat. Blue Lizalfos along the road north of Kolami Bridge and enemy camp south of it in Tabantha Frontier region wield them. One is located inside a Treasure Chest next to a tent on the island in the middle of Strock Lake in the Tabantha Frontier region. It has a base attack power of 10, though this may be increased by certain weapon bonuses.

The Rito guards Gesane and Mazli that patrol the path leading to Rito Village both wield Feathered Spears. 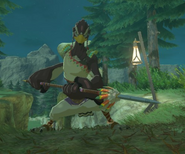 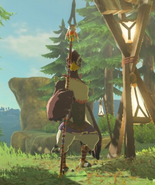 Mazli holding his Feathered Spear
Add a photo to this gallery

Retrieved from "https://zelda.fandom.com/wiki/Feathered_Spear?oldid=540358"
Community content is available under CC-BY-SA unless otherwise noted.