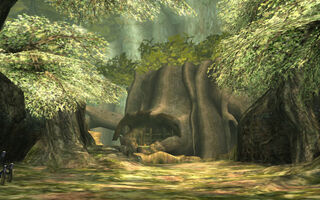 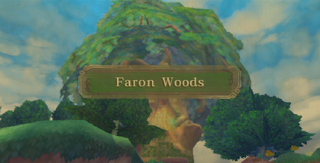 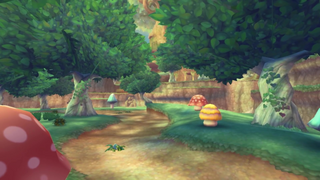 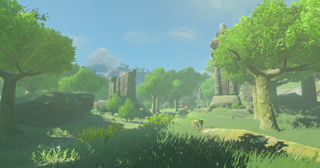 Faron Woods,(TP | SS | BotW | LCT | HW)[1][2][3][name reference needed] also known as the Southern Wood,(TP)[4] and the Skulltula Forest,(LCT)[5] is a recurring location in The Legend of Zelda series.[6] As its name suggests, Faron Woods is part of and makes up a large majority of the overall Faron Province. It is home to one of the province's two protectors, Faron the Spirit of Light. The other protector from Skyward Sword, Faron the Water Dragon, is located in the nearby Lake Floria.

Faron Woods was known as the Kokiri Forest in Ocarina of Time.[7]

Link first enters Faron Woods looking for Talo, who ran off chasing a Monkey. Talking to Coro will result in Link obtaining a free Lantern as part of a special offer, which serves to aid the young hero on his way through a cave that leads to the northern section of Faron Woods.[8] Link eventually makes his way to the entrance of the Forest Temple, where he rescues Talo and a Monkey from Bokoblins.

However, the next time Link enters Faron Woods, it is covered in Twilight, and he is pulled in by a Shadow Beast. The Triforce symbol on his hand shines, causing the beast to drop him. Link turns into Wolf Link for the first time and falls unconscious shortly after, leaving him to be dragged to Hyrule Castle by the Shadow Beast and imprisoned. When he returns to the Twilight-covered Woods, he is tasked by Faron the Spirit of Light to restore light to the Woods by collecting its Tears of Light.[9] After doing so, Link is restored to his Human form. Faron tells Link that he must obtain the Fused Shadow in the Forest Temple to counter Zant.[10] Since more monsters have begun appearing around the Woods, Link will have to talk to Coro to obtain the Small Key that will open up the cave's gate that leads to North Faron Woods.[11]

After Link obtains all three Fused Shadows, Zant ambushes him at Lanayru Spring, cursing him to be trapped in his Wolf form and gravely injuring Midna. Link takes Midna to Princess Zelda, who heals Midna and tells Link that the only way to break the curse placed on him is to obtain the Master Sword, located in the Sacred Grove deep within Faron Woods.[12] The entrance to the Sacred Grove is located near Trill's Shop, where Link must stand on a ledge and jump through various Tree roots with the help of Midna From there, the young hero must continue to jump around various obstacles and eventually reach the hidden Sacred Grove.

Obtaining the Mirror Shard from Snowpeak will force Link to once again return to Faron Woods and make his way to the Sacred Grove to retrieve the next Mirror Shard in the Temple of Time.[13]

Located in Southern Faron Woods are the Faron Spring and Coro's Store. It has an exit into the southern section of Hyrule Field and an entrance near the Faron Spring that leads back to the Ordon Woods. An Owl Statue can be found here, located behind a rock near the Lantern Shop that can be destroyed with a Bomb.

Faron, the Spirit of Light of Faron Province, lives in Faron Spring as the guardian of the Woods. After light is restored to Faron Province, Faron returns Link to his human form and gives him the Hero's Clothes.

Coro runs a Store in South Faron Woods. When he first meets Link, Coro gives him a free Lantern in hopes of boosting sales for Lantern Oil. Link must obtain the Lantern while chasing Talo and the Monkey in order to make it through the cave that leads to North Faron Woods.

The northern section of the Woods is home to a barren swamp-like area filled with a poisonous purple fog and numerous monsters. Other notable features include Trill's shop, the Forest Temple, the entrance to the Sacred Grove, and the decaying ruins of the Temple of Time much deeper within the grove itself.

The Faron Woods Swamp is between South and North Faron Woods. Before Faron Woods was covered in Twilight, Link could freely explore this area, which was infested with Bokoblins, Keese, and Deku Babas. However, after Twilight invaded the Woods, purple Fog shrouded a part of the northern section, and this Fog will damage Link if he touches it. The Fog can be easily burned away with the Lantern. A Monkey will demonstrate this on Link's first trip to the Forest Temple by stealing his Lantern and swinging it around on a stick. The first time this Fog is encountered is when Faron Province is covered in Twilight. Midna can help Link jump across the fog over various logs and rock outcroppings. The upper canopies of the Trees are densely populated with Deku Babas, and, in Twilight, with Twilit Baba.

The Forest Depths contain the area surrounding the Forest Temple.[14] It also contains a shop that seems to be owned by Coro and run by his pet myna bird, Trill. Link can easily steal Red Potions or Lantern Oil from this shop but must beware that Trill will attack him if he does not pay. If Link simply puts one Rupee in the payment box, Trill will not attack.

Beyond Trill's Shop is the Forest Temple, which is home to many Monkeys that Link must rescue to reach the Boss's chamber. The Forest Temple is full of many Bomblings and Skulltulas, as well as wind-operated switches attached to rotating bridges. It is in the Forest Depths that Link first encounters the Hero's Spirit and learns the Ending Blow.

The entrance to the Sacred Grove is located to the west of the path to the Forest Temple. Link reaches it the first time with Midna's help, jumping onto Tree roots across the large chasm. The second time, Link must fly across the gap using the Golden Cucco given to him by Rusl.

All that remains in the present time is the Master Sword, apart from some ruins. The actual Temple of Time can be accessed through a single pair of doors that appear to lead to the other side of the door with nothing on the other side. However, upon opening the door and entering it, Link is transported to the Temple of Time, in the past.

Faron Woods is the first place Link visits on The Surface after departing from Skyloft. While on Zelda's trail, Link searches for members of the Kikwi race using the Goddess Sword's Dowsing ability, finding them hiding from the invading Red Bokoblins in many places throughout the forest.[15] Upon discovering each one of these plant-like creatures, the large Kikwi elder Bucha gives Link the Slingshot. With the slingshot, Link is able to continue on to the deeper part of the forest known as Deep Woods, and later the Skyview Temple.

Link visits Faron Woods for the second time while on his quest for the three Sacred Flames to temper his blade. The Woods are now infested by stronger and deadlier demons, including Blue Bokoblins and Moblins, suggesting that the seal on The Imprisoned is weakening. Link completes Farore's Silent Realm Trial and receives the Water Dragon's Scale as a reward. It allows Link to dive deep beneath the water for a limited time and gives him special maneuvering abilities in the water.[16] Link is able to enter the Great Tree and proceeds to climb to the top of the large canopy towering over the surrounding Faron Woods. It is there that Link meets a Kikwi hermit named Yerbal. Yerbal reveals the location of the entrance to Lake Floria to Link. Lake Floria, despite being sealed off from the outside world, seems to be in a troubled time. Ghirahim, leading a group of large fish known as Cranioc, attacked the Water Dragon Faron, mortally wounding her and scaring many of the local Parella into hiding. After venturing with a Parella known as Jellyf through the underground tunnels of the lake, Link meets Faron, who is recuperating from her wounds in a Water Basin. Faron asks Link to return to Skyview Spring through the Skyview Temple to retrieve some Sacred Water to heal her wounds. After Link does so, Faron is healed and reveals the entrance to the fourth dungeon, the Ancient Cistern behind the Floria Waterfall, where Farore's Sacred Flame is found.

Link visits Faron Woods for the third and final time to find Faron in order to learn one of the four parts of the "Song of the Hero". However, the Woods are completely flooded. Link locates Faron inside the Great Tree and learns that she flooded the Woods to clear out the monsters in the area.[17] As a final test, she makes Link search the flooded Woods for her musical notes, called Tadtones, so that he can learn her part of the Song.[18] After Link collects the Tadtones, Faron teaches Link her part of the "Song of the Hero" and returns the Woods to their natural state.

Faron Woods serves as the home to the Kikwi race and the Skyview Temple. Towering over the Woods is the Great Tree, a landmark that can be seen as far away as the Sealed Grounds. There are other features throughout the Woods such as a river, two springs, plentiful bird and bug life, and giant Mushrooms that harbor Mushroom Spores that can be found in various colors. At the southern edge of the Woods is Lake Floria, where Faron the Water Dragon and the Parella reside.

The Faron Woods are located in the Faron Grasslands in Breath of the Wild. They are situated south of the Finra Woods and north of the Fural Plain.

The Skulltula Forest: Ranger is the third Stage of Level 4 in Link's Crossbow Training.

Link can freely tour the Skulltula Forest: Ranger to hunt the 18 Skulltulas. The Skulltulas can be found dangling from Trees, roaming the grounds, or perched on walls. Most Skulltulas can be killed safely from a distance, otherwise coming within close range will cause them to attack Link. Other Targets such as Skulls, Skeletons, Jars, Orange Rupees, Deku Babas and a Scarecrow can be shot for additional points.

Faron Woods appears as a Stage in Hyrule Warriors.

Faron Woods takes its name from the province that it is a part of, which in itself is named after the Water Dragon.