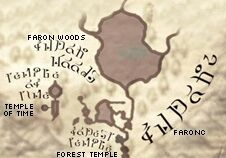 Map of the Faron Province from Twilight Princess

Twilight Princess:
Faron Woods
Hyrule Field
Ordona Province
Eldin Province
Lanayru Province
Desert Province
Peak Province
Skyward Sword:
Faron Woods
Sealed Grounds
Deep Woods
Lake Floria
The Faron Province is a recurring location situated in Hyrule in The Legend of Zelda series.[1] The Province is named after its original protector, the great Water Dragon known as Faron, from the Era of the Goddess Hylia and the Sky Era. It is later protected by the Light Spirit of the same name during the Era of Twilight.[2][3]

A large majority of the province is made up of the Faron Woods and other forested areas. It houses a number of ruins, including several ancient temples that have become overgrown by nature, and also at least two sacred springs.[citation needed]

The Faron Province is situated at the furthest southern part of the Kingdom of Hyrule in Twilight Princess. It is located to the north of the Ordona Province, south of the Lanayru Province, southwest of the Eldin Province and southeast of the Desert Province in the Wii version of the game.[citation needed]

Link, a young hero from Ordon Village in the Ordona Province, first enters the Faron Province while pursuing his friend Talo and a monkey that has recently been causing trouble in his village, leading him through Faron Woods and to the Forest Temple, where he finds them captured by a group of Bokoblins. The province is then later covered in a curtain of Twilight the next day.[4] After saving the Light Spirit Faron and returning light to the area, Link sets off to return to the Forest Temple at the request of Midna to retrieve the first piece of the Fused Shadow.[5]

Later on in the game, after having been permanently transformed into a wolf due to Zant's Shadow Crystal, Link must return to the Faron Woods to enter the Sacred Grove hidden deep within and retrieve the Master Sword at the ruins of the Temple of Time in order to return to his human form.[6] The young hero later meets up with Rusl in the Faron Woods,[7] who helps him access the Sacred Grove once again, where he then must enter through the Temple of Time's remaining entrance. He is transported to a point far into the past, a time when the temple still stood in full glory. There, he collects the Dominion Rod and a piece of the broken Mirror of Twilight upon defeating Armogohma.

During the ending credits, Link is seen riding through Faron Woods on Epona.

In the Era of the Goddess Hylia and the Sky Era, the Faron Province is protected by a great Water Dragon, Faron, who was ordered to protect the Province by the goddess Hylia.[8] She resides with the Parella in Lake Floria, located southeast of Faron Woods. Coming from the world above the clouds, Link first visits the Province when he lands on the Surface in his desperate mission to find his childhood friend, Zelda, who landed there sometime earlier. He lands in the Sealed Grounds, and meets the elderly Impa protecting the Sealed Temple. She directs him to continue on his quest in Faron Woods,[9] the defining feature and largest section of the Faron Province. Upon reaching the woods, he is tasked by the Kikwi elder Bucha to find the other scattered and hidden members of the tribe, who claims that putting his fear and worry to ease will help him remember where Zelda ran off to after she met him.[10] After doing so, he is given the Slingshot, granting him access to the Deep Woods and Skyview Temple. While searching for Zelda in the Skyview Temple, Link's companion Fi detects she is now located. Upon fighting and defeating the temple's boss, Ghirahim, he finds the Skyview Spring, but Zelda has already left the Faron Province by then.[11] He then moves on to the next Province in his journey, the Eldin Province.

Link later returns to the Faron Province for his first Silent Realm trial in the Faron Woods. He is given the Water Dragon's Scale after completing the challenge, allowing him access to the Great Tree. The elder Kikwi, Yerbal, is found at the top of the Great Tree and sends Link to the other main part of Faron Province, Lake Floria, to meet with the Province's protector.[12] The Water Dragon Faron had been wounded by an attack from Ghirahim.[13] Link heals her with Sacred Water from Skyview Spring, and in return she parts the waterfall in front of the Ancient Cistern, the dungeon hiding Farore's Flame.

Link must visit the Province one last time in order to receive Faron's section of the "Song of the Hero", but Faron has flooded the woods to wash away the monster infestation,[14] forcing the aged Impa guarding the Sealed Temple to create a barrier around the woods and making it impossible to move beyond the Sealed Grounds.[15] While Link searches for a way into the woods, The Imprisoned attacks once again. After using his Groosenator to help Link re-seal The Imprisoned, Groose gets the idea to use it to launch Link into the woods.[16] Once there, Link must find Faron. After finding Faron at the Great Tree, she instructs Link to collect the various Tadtones scattered across the submerged area.[17][18] When he has successfully found all of the Tadtones, Faron teaches Link her part of the "Song of the Hero" and lowers the water level so that he and the Kikwi are able to make their way around Faron Woods normally again.