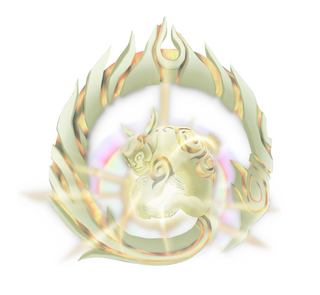 Faron is the Spirit of Light who watches over the Faron Province in Twilight Princess.[2] It is named after the dragon of the same name from the Era of the Goddess Hylia.[3][4]

Prior to the events of Twilight Princess, the Dark Interlopers tried to take over the Sacred Realm. Faron, along with Eldin and Lanayru, were asked by the Golden Goddesses to intervene, so the Light Spirits sealed away the Interlopers' magic.[5]

Faron is the second spirit Link meets during his journey. As part of Zant's plan to take over Hyrule, the Shadow Beasts were ordered to steal the light of the Spirits, including Faron.[6] Once Link recovers all of the Tears of Light in the Faron Woods, Faron recovers its powers and returns the young hero to his human form. The spirit then tells Link of the Twilight,[7] and of his predecessor, who is implied to be the Hero of Time.[8] It also informs Link that he is the new hero, having been chosen by the gods.[9]

Later in the game, Faron, along with the other Light Spirits, aid Link and Princess Zelda in the fight against Ganondorf by granting Zelda the power of the Light Arrows. After Ganondorf is defeated, it and the other Spirits grant Midna's return to her true form.

Faron's name is a reference to the golden goddess, Farore.