Zelda Wiki
Register
Don't have an account?
Sign In
Advertisement
in: Dragons, Characters, Characters in Skyward Sword,
and 2 more
English

This article is about the dragon from Skyward Sword. For the Spirit of Light, see Faron (Spirit). 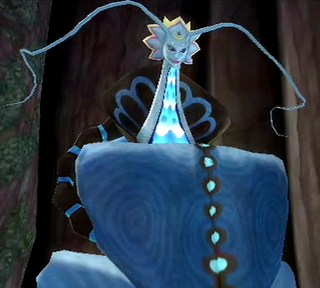 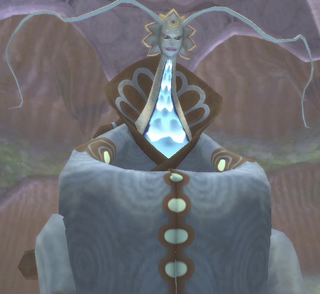 Faron is one of the three Dragons who protect The Surface in Skyward Sword, alongside Eldin and Lanayru.[3] A servant of the goddess Hylia, Faron lives in Lake Floria in the Faron Province, a region she has protected since ancient times.[4]

Link is directed to see Faron by Yerbal, an aged Kikwi. He tells Link not to mention his name to her, as the dragon's location in Lake Floria is supposed to be a secret.[5] He also mentions that she is "persnickety,"[6] a fact that Link confirms when she questions that a mere boy like him could possibly be the Hero of the Goddess when they first meet. Upon Link's arrival in Lake Floria, a Parella named Jellyf asks him if he can help Faron after witnessing his spin maneuver via the Water Dragon's Scale, and takes Link to her.[7][8] Upon reaching Faron, the sacred dragon is initially surprised with Link because he has intruded into her home, a sacred place that few are able to locate and enter.[9] However, she calms down after noticing that the young hero possesses the Water Dragon's Scale, which can only be carried by The Goddess's chosen hero.[10] After Link explains to Faron how he found her lair,[11] the Water Dragon tells him that she was attacked by Ghirahim, who wounded her and left her to die.[12] Due to her wounds, Faron is forced to sit in a basin that is filled with water containing healing properties called Sacred Water. She asks Link to retrieve more Sacred Water from Skyview Spring because her water has lost its special properties, and states that she will reveal the location of Farore's Sacred Flame to the young hero in return.[13] However, she also uses this task as a test to see if Link really is The Goddess's chosen hero. After Link heals her with the Sacred Water, Faron becomes healthy once again, and expands to her full size. Faron tells the young hero to follow her to Floria Waterfall, where she reveals the entrance to the Ancient Cistern and tells Link to venture inside to find the first Sacred Flame.[14]

When Link arrives at the Fire Sanctuary deep within Eldin Volcano, he finds the entrance blocked by a row of flames. Only watering the large frog statue's tongue will douse the flames. However, this requires a large amount of water.[15] In search of a container large enough to hold the necessary amount of water, Link heads back to Faron and requests to use her Water Basin. She grants Link her permission to use it, stating that she has no intention of using it again.[16] With the help of Scrapper, Link manages to bring the basin back to the Fire Sanctuary and douses the flames, opening the entrance to the dungeon.

Later, Link returns to Faron Woods to learn the portion of the "Song of the Hero" entrusted to Faron by the Goddess. He finds that the woods have been flooded and investigates the Great Tree, the source of the water. Inside the tree, he meets Faron, who reveals that she is responsible for the flood, explaining that she had the intention of destroying the monsters that had invaded Faron Woods.[17] Faron challenges Link to a final test to prove that he is worthy of learning the "Song of the Hero" by collecting Tadtones, small aquatic creatures similar in appearance to musical notes, which Faron has hidden throughout the flooded woods.[18][19][20] Upon retrieving the Tadtones, Link is taught Faron's portion of the Song of the Hero.[21]