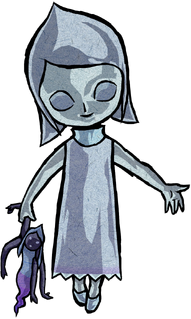 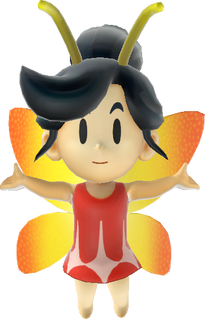 The Fairy Queen,(LANS | TWW | FSA)[2][3][4] also known as the Queen Fairy,(OoA)[5] the Queen of the Fairies,(TWW)[6] and the Queen of Fairies,(TWW)[7] is the Fairy that rules over all of the Fairies and Great Fairies in The Legend of Zelda series. The Fairy Queen goes unnamed in Link's Awakening DX. They are known to be much more powerful than the Great Fairies, and as such, they can empower Link with abilities that no Great Fairy can bestow upon the young hero.[1] Various Fairy Queens have appeared throughout the series, with their appearances changing drastically between each game.

In A Link to the Past, a Fairy Queen named Venus lives in the Pond of Happiness located inside a cave on an island in the middle of Lake Hylia.

In Link's Awakening DX, a Great Fairy who is proclaimed as the Fairy Queen can be found within the Color Dungeon.[8] She is residing in the last room in a pool, and as thanks for visiting her, she will offer to grant Link the "power of color" by changing his green tunic into either a Red Clothes or a Blue Clothes. The Red Tunic will increase the offense of Link's weapons, whereas the Blue Tunic will increase his defense against attacks.[9] Link can revisit the Fairy Queen to change between the two tunics, but he can never change back into his green tunic. However, in the Nintendo Switch version of Link's Awakening, Link can re-visit the Color Dungeon to have the Great Fairy change his tunic to either the tunic he didn't choose (after initially completing the Color Dungeon, then as long as he is wearing the red/blue tunic from that point onward), or he can change back into his original green tunic (if he's not already wearing it) as much as he desires. For example, after initially beating the Color Dungeon, Link has the choice of either the red tunic or the blue tunic. From the first re-visit onward, Link can choose the red tunic or green tunic (if he's wearing the blue tunic), the blue tunic or green tunic (if he's wearing the red tunic), or the red or blue tunic (if he's wearing the green tunic). The Fairy Queen's design in the Nintendo Switch version also has a red dress, and her color scheme is similar to that of her appearance in Oracle of Ages, but with yellow antennae and yellow wings with orange tips.

The Fairy Queen in Oracle of Ages is known as the guardian of the sea and lives near the Eyeglass Island Library, protecting the waters of the Zora Seas.[5] When Link first meets her, she has been transfigured by Veran into an Octorok, and informs the young hero that only by sprinkling the Fairy Powder on her can she return to her normal appearance.[10] Link finds the powder and uses it on her, restoring her as the Fairy Queen and cleansing the sea of Veran's evil influence.[11]

The Queen of the Fairies in The Wind Waker is located in the Mother and Child Isles,[7] which can be accessed only by using the Ballad of Gales and after rescuing Aryll from the Forsaken Fortress. She rewards Link with the ability to wield Fire Arrows and Ice Arrows.[12]

Unlike previous Fairy Queens, she has the voice, appearance, and mannerisms of a child, although it is unknown if this is her true form. The mechanical sounds in her variation of the Great Fairy music, her puppetry of a Great Fairy doll, and a "cut puppet strings" motion when she disappears cast doubt on this. She also holds a doll resembling a Great Fairy, which is what she uses to grant the young hero the Fire and Ice Arrows. After the Queen of the Fairies hands over the powerful Arrows, she flirts with Link by saying that he is just her type,[13] which embarrasses him.

The Queen of Fairies also makes a small cameo in Four Swords Adventures during the Hyrule Castle level. She had heard the Shrine Maidens' cries from afar and came to the castle in an attempt to help them, but found that the castle was overtaken by fiends who captured her and split her into two Zoras.[14] She asks the four Links to find her other half, and when he does, they reunite and reveal themselves to be the Fairy Queen,[15] who easily obliterates the barrier and soldiers guarding the entrance to the castle.[16][17] As thanks for helping her, the Queen of Fairies promises the four Links to tell the other Great Fairies to help them whenever needed.[18]

Even though the Fairy Queen has a similar appearance as the one from The Wind Waker, she curiously refers to herself as a Great Fairy after she recovers her true form.[15] The power used by the Fairy Queen during the Hyrule Castle level is the first and only time thus far that allows the audience to catch a glimpse of the tremendous power that Fairy Queens possess.