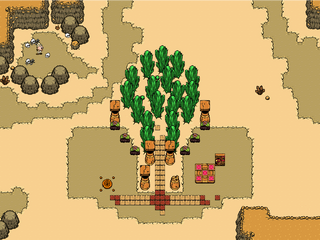 The Fairy Garden is a location in Freshly-Picked Tingle's Rosy Rupeeland.

The Fairy Garden was once a beautiful place, but after the five Fairies that protected it went to sleep, it became a dried-up desert. When Tingle visits the garden, he restores power to each of the five fairy fountains, thus waking the Fairies. In turn, the Grand Fairy tells him the truth about Uncle Rupee. Once he realizes that he is being used by Uncle Rupee, Tingle decides to stop him. After Tingle departs, the Fairies begin the long process of restoring the garden. Later, Tingle discovers that Pinkle, his fairy assistant, is the Grand Fairy's daughter, and is being held captive by Uncle Rupee.

The Fairy Garden has its own transit system. Tingle can rent a vehicle with space for two for the price of 2,000 Rupees. If the vehicle runs out of gas, it will disappear, leaving him stranded. However, the vehicle can be refueled at each of the five fairy fountains once they have been restored to their full power.