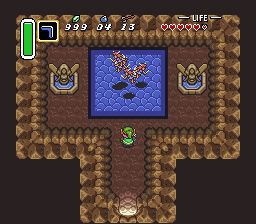 A Fairy Fountain in A Link to the Past

The Faces of Evil
The Wand of Gamelon
Hyrule Warriors

Great Fairy Fountain
Cave of Ordeals
Fairy Fountains,[1][2] also known as Fairy's Fountains,(OoT)[3][name reference needed] are recurring locations in The Legend of Zelda series.[name reference needed] They are magical springs found across many places of Kingdom of Hyrule which contain a small group of Fairies within. They can usually be found in Caves or by bombing certain walls to reveal the hidden entrance. They have appeared in almost every game in The Legend of Zelda series to date, providing a good source of healing for Link in which he can recover his Hearts at once or store the Fairies in Empty Bottles for later use.

Although the Fairy Fountains were missing in The Adventure of Link, they returned in A Link to the Past. Fairy Fountains in this game required certain items in order to reveal their cleverly-covered entrances. There are many of them spread across Hyrule, and once Link enters a fountain, he can find several Fairies floating over a pond of water ready to heal the young hero or be caught in an empty bottle. There are also Fairy Fountains located within certain dungeons.

Fairy Fountains are all mostly hidden underground in Ocarina of Time, either beneath large boulders or below a circle of rocks. Upon entering, there is a short hallway leading to the elegant Fairy's Fountain that houses several Fairies above its pond of water. It is surrounded by several columns, having a type of angel mark on top of them. Link can easily exit these fountains by stepping onto the platform with a shining ray of light found at the beginning of the fountain.

Other times, however, a Fairy's Fountain can be found outside, such as the one found in the oasis of the Desert Colossus, and just like its predecessor, Link can also stumble upon one in certain dungeons or temples.

In Majora's Mask, the fountains are curiously known as Fairy's Fountains despite that (with the exception of one) Great Fairies live in them and that they serve the same purpose as other Great Fairy Fountains. There are only five Fairy's Fountains. One is located in Clock Town, while the other four are located in each of the four cardinal directions of Termina: Woodfall, Snowhead, Great Bay, and Ikana Canyon. They are not as well-hidden in comparison to its predecessor, for they are easily found inside a Cave in plain sight.

The appearance of the Fairy's Fountain in Majora's Mask is rather similar to that of Fairy's Fountains in Ocarina of Time. There is still a large pond in the middle, and the fountain is surrounded by several columns and arcs. Since the Great Fairy living within was shattered into Stray Fairies by the Skull Kid wearing Majora's Mask, it is up to Link to gather the missing Stray Fairies from each of the area's dungeons in order to receive the respective power-up from said Great Fairy. Once the Great Fairy is restored and regains its true power, it will appear as soon as Link approaches the fountain.

Another aspect that makes the Fairy's Fountains different from previous Zelda games is that Stray Fairies cannot be put into a bottle, but the Fairies can heal him. The fountain that is Beneath the Well contains regular Fairies which can be put into bottles.

There are six Fairy's Fountains scattered across Holodrum in Oracle of Seasons.

The Fairy Fountains in The Wind Waker are all located in different islands of the Great Sea, and are named Fairy Fountains instead of Great Fairy Fountains despite that they house a Great Fairy within.[4] They are easily spotted since the ones that are out in the sea look like houses shaped like seashells. Their entrances are all blocked by certain obstacles such as giant rocks, fires, vines (among other things) that must be removed using Bombs or the Skull Hammer. The inside of the fountains still retain the same large pond from which the Great Fairies come out of, and the inside walls have the same appearance as well. There are also several seashells aligned the walls, keeping to the outside characteristics of the fountain.

After Link has received the upgrades or power-ups from its respective Fairy Fountain, the Great Fairy will no longer be at the fountain. Instead, Fairies will be floating over the pond, ready to heal the young hero or be put in an Empty Bottle. To see the list of the Fairy Fountains as well as the upgrades received from each one, see here.

There are seven Fairy Fountains in The Minish Cap. Four of them can be found hidden in Caves behind a wall that must be opened with Bombs. One is in South Hyrule Field behind some tall grass by the river, another is between two rocks in the lower level of the Trilby Highlands, a third is in the northeast of Mount Crenel's Base between two trees, and the fourth, which has a Piece of Heart waiting in the middle of it, is between jagged rocks at the base of the Crenel Wall in Mount Crenel. A Fairy Fountain inside a tree in North Hyrule Field and another Fairy Fountain under the fountain on the left of the Hyrule Castle Garden can randomly be opened by Fusing green Kinstones with anyone. One more Fairy Fountain can also be accessed after Fusing a blue Kinstone with Candy after completing the Fortress of Winds. This fusion will cause a small shoal to appear in the Trilby Highlands in front of a Cave containing the Fountain that can be dug into with the Mole Mitts.

Unlike previous Zelda games, the Fairy Fountains in Twilight Princess are not located inside Caves or other well-hidden places. Instead, after meeting a Great Fairy on every tenth floor of the Cave of Ordeals, she will reward Link by releasing Fairies at the Spirit Springs.[5]

Fairy Fountains are located in well hidden places in A Link Between Worlds, including certain dungeons. Many of these are located in the same locations. However, much like in A Link to the Past, some fountains require certain items for proper entry, such as the Ice Rod or Tornado Rod needing to be used to momentarily extinguish some flames in a cavern leading to the fountain.

Fairy Fountain-like areas inhabited by a pair of Fairies appear in the islands of Koridai in The Faces of Evil. A Fairy Fountain can be found in the mid-point of Spearfish Falls. The Fairies there give Link a Life Heart on his first visit, and some Water of Life for every subsequent visit. If Link owns a Canteen, the Fairies will refill it with Water of Life.

In Hyrule Warriors, Fairy Fountains are Keeps that can be found on several Stages such as Hyrule Field, Faron Woods, the Valley of Seers, Ganon's Tower, and Stages where Fairy Fountains were not originally found such as Skyloft and the Palace of Twilight. In various Scenarios, the Hyrulean Forces or the Skyloft Forces will attempt to use the Fairy Fountains to call upon the aid of the Great Fairy to weaken the opposing Forces or, in "The Sorceress of the Woods", to save the Deku Tree.