For other uses, see Fairy (Disambiguation)

It has been suggested that the portion of this page concerning Big Fairy should be made into its own page. Should the target page already exist, this content should be merged into it where appropriate. Discuss this on article's talk page. 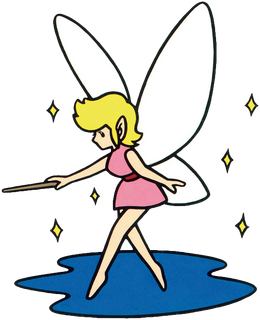 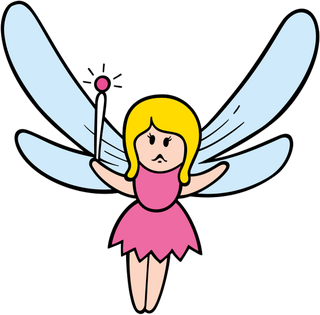 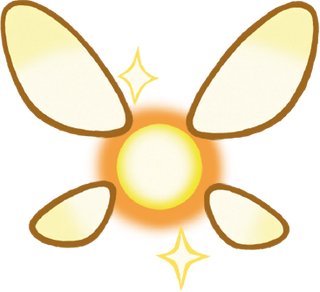 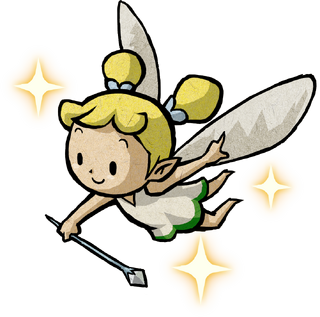 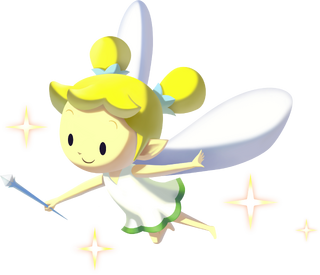 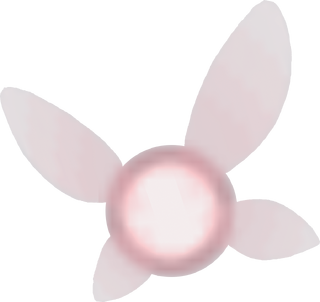 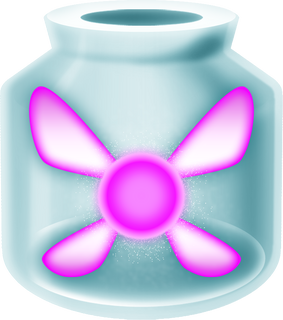 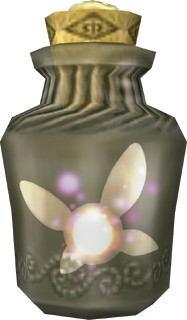 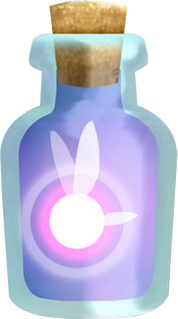 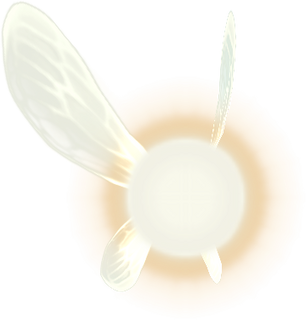 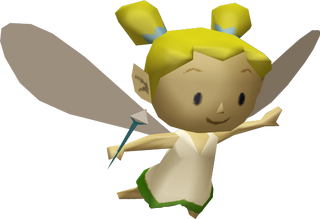 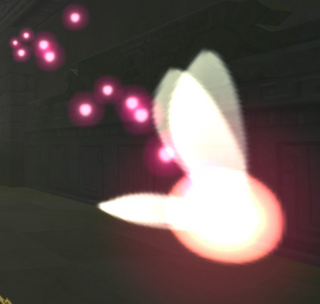 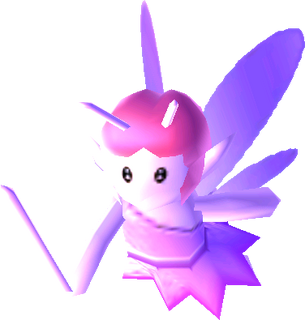 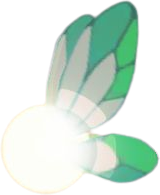 Healing Link[1]
Reviving Link[1]
Fairies are a recurring race of creatures in The Legend of Zelda series.[1][2][3][note 1]

Most Fairies are small creatures with healing powers, and they usually fly by means of delicate, insect-like wings. Their appearances vary from game to game: in some games, such as Ocarina of Time, they resemble small orbs of light with four wings, while in others they take the form of tiny, winged humanoid females.

Navi, a Fairy from Ocarina of Time

Fairies usually have one of two roles in the series. Most Fairies possess healing powers; they can restore some of Link's Hearts when he is wounded. From A Link to the Past onwards, these Fairies can usually be caught in Empty Bottles for later use. If Link falls in battle while carrying a bottled Fairy, it will automatically come out to revive him. Groups of Fairies can be commonly found in Fairy Fountains scattered through the land, although some may also occasionally be found by breaking Jars or cutting grass. In some games such as A Link to the Past, Bubbles and Sparks can be turned into Fairies by using Magic Powder or the Boomerang. In Skyward Sword, Fairies can be summoned by drawing the Triforce on a Goddess Wall.

The second role held by Fairies is that of a traveling companion. In several games, beginning with Ocarina of Time, Link has been accompanied on his travels by Fairy companions. Although in many cases they are used to facilitate gameplay (allowing Z-Targeting, for example), they also provide advice on what to do next or how to defeat certain enemies. In other games, such as Phantom Hourglass, companion Fairies also serve as the cursor for guiding Link.

In Ocarina of Time, every Kokiri, with the exception of Link before Navi is assigned as his partner by the Great Deku Tree, is partnered with such a guardian Fairy.[5] In Majora's Mask, the Skull Kid had Fairy companions in Tatl and Tael. Tatl gets separated from them, and travels with Link to get his Hylian form back and to stop the Moon from crashing.

In Tri Force Heroes only, Fairies possess a unique role in that they are used as the Links' extra lives. Whenever a Link falls in battle (resulting in all Links falling due to their shared health), a Fairy appears to revive him, and the Links are forced to restart the Stage of the Level. Three Fairies are brought into a Level when the Links enter the Drablands. If the Links fall after losing their last Fairy, the Level is failed and the Links are forced to exit. After clearing a Level, any Fairies remaining are tallied and turned into bonus Rupees, multiplied by 30 for each Fairy (E.g. three Fairies will reward 90 Rupees). In single-player mode only while using the Doppels, Link can use a Fairy to skip Stages and advance to the next one. Doing this, however, will empty all of the Rupees Link has collected thus far, decrease the number of bonus Rupees Link earns after clearing the Level, and will replace the contents of a Material chest with 20 Rupees for each Fairy used.

In Ocarina of Time, the Fairies are referred to as Fairy's Spirits in the Medicine Shop, appearing as nondescript, glowing orbs with wings. The Fairies in Oracle of Seasons are in human form, but the Season Spirits look identical to these orb-like Fairies. The Great Fairies in Four Swords and The Minish Cap first appear in the form of a Fairy Spirit before taking a human form. In Four Swords Adventures, the Shrine Maidens turn into the form of Fairy Spirits when freed from their Crystals. In Phantom Hourglass as well as Spirit Tracks, the only Fairies that appear are respectively the Servant Spirits and the Spirit of Healing, who also take on said shape.

Great Fairies are much larger than regular Fairies, at the size of a full grown Hylian or larger, and they almost invariably inhabit a winged female form (the only exception to this rule is the case of the Great Fairies in Ocarina of Time, Majora's Mask, and Hyrule Warriors, who resemble women and can fly, but have no visible wings).

A Stray Fairy is a portion of a shattered Great Fairy. They appear in Majora's Mask, Oracle of Ages, and Four Swords. These Fairies are different from most other Fairies, appearing more rabbit-like in physicality and more subdued in their composure.

All of Link's canon companions are in Fairy's Spirit form. All of the non-canon variety are in humanoid form, with the exception of Hyrule Warriors.

In Freshly-Picked Tingle's Rosy Rupeeland, the Fairies lived in the Fairy Garden, however it turned into a barren desert after the five Fairies that protected it went to sleep. The Grand Fairy tasks Tingle with restoring the five Fairy Fountains so to restore the land itself. Tingle's companion, Pinkle, is also a Fairy and is the daughter of the Grand Fairy, who was imprisoned by Uncle Rupee and had her powers removed. After Tingle rescues her from the Auros Ruins, she regains her powers and transforms back into her original Fairy form.

Various Fairies appear in The Legend of Zelda TV series. Most of the Fairies, with the exception of Spryte who lives in North Castle with Link and Zelda, live in the Fairy Spring in Hyrule. There, they are ruled by King Oberon alongside his daughter. The Fairies only appear in the "Fairies in the Spring" episode, where Spryte's sister is creating Water Monsters with her magic since King Harkinian's Royal Water Park is draining their water supply. Eventually, King Harkinian and King Oberon clear up all misunderstandings, allowing both humans and Fairies to enjoy the water park.

In The Crystal Trap, two Fairies make an appearance to help Princess Zelda on her quest. The first Fairy that Zelda encounters is the Blue Fairy, which appears after the princess defeats a Gibdo using the Magic Arrows. Later in her quest, Link and Zelda will find the Pink Fairy only if the duo defeat the group of Octoroks that ambushed them in the forest.

In The Faces of Evil, a pair of Fairies live in a Fairy Fountain close to the mid-point of Spearfish Falls. They proclaim Link as their hero and give him a Life Heart on their first encounter, followed by Water of Life for every subsequent visit. If Link owns the Canteen, the Fairies will also fill it with Water of Life. The Fairies' appearance is heavily based on the design of the Fairy artwork from A Link to the Past.

In The Wand of Gamelon, another pair of Fairies live in the Fairy Pool. They were imprisoned by the Three Witches when they froze the Pool. After Zelda defeats them and rescues the Fairies, they reward her with a Life Heart, Fairy Dust, and some Water of Life. They will also refill Zelda's Canteen if she owns one.

In Zelda's Adventure, Fairies appear in small ponds found throughout Tolemac, and fully recover Zelda's health when approached. Three Fairies can be found in total: one in the Forest of Torian, one in a desert oasis in the South Gubasha Desert, and one in the Plain of Hobel.

In Super Smash Bros. Brawl, a Fairy in a Bottle appears as a Sticker. A Fairy resembling Navi also appears in one of Link's taunts.

In Hyrule Warriors, Fairies appear as elemental entities in Adventure Mode that are used to destroy harmful barriers that surround certain Keeps. They come in the elements Fire, Water, Lightning, Light, and Darkness. They appear trapped within certain Keeps and are freed when these Keeps are captured. Once freed and collected, they are kept in the item inventory within a Bottle and can only be used while inside a Keep that has a barrier of the corresponding element surrounding it.

In the Majora's Mask DLC Pack, white Rupee Fairies appear in certain battles in the Termina Map where Forces compete to collect the most Rupees at the end of the battle. These Fairies are kept by Fairy Hunters, and are freed when these Captains are defeated. Upon collecting a Rupee Fairy, all enemies will drop Silver and Gold Rupees for a short amount of time, which are worth more than the regular Green, Blue, and Red Rupees. In the same DLC Pack, the Fairies Tatl and Tael make a brief cameo alongside the Skull Kid during Young Link's attack where he slices the Moon in half.

A Fairy named Proxi also accompanies Link during his battles, and speaks on his behalf. Proxi also accompanies Young Link. A generic Fairy (although referred to as Navi in the North America's Wii U release) appears in "The Land of Myth" Scenario, pleading that the Hyrulean Forces rescue Princess Ruto from Darunia, who had captured her. The Great Fairy also sends Fairies to attack enemy troops when she is summoned from the Fairy Fountain. They help in various ways depending on the battle; such as dropping giant Bombs on enemy units, calling upon a recreation of the Terminian Moon to knock Argorok out of the sky, or by sending a rain of energy that destroys several enemies on the field.

Fairies also accompany Link's Great Fairy weapon type. They surround the Great Fairy while she dashes, and attack enemies as part of the Focus Spirit attack.