"Folks around here tell of a fabulously rich family that once lived in one of the houses in this village... But they say that the entire family was cursed due to their greed! Who knows what might happen to those who are consumed by greed..."
— Shikashi

The Fabulously Rich Family are characters from The Legend of Zelda: Ocarina of Time. This wealthy family has been cursed due to their greed. In their Hylian forms, they are young males with red hair, pointed ears and closed eyes, except for the father who is an adult and almost bald. They all wear green or orange sleeveless shirts, with pants of the lighter color. The name of the family is unknown, as well as the names of its members. 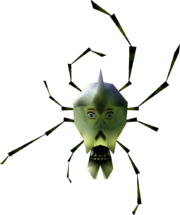 The Fabulously Rich Family resides within the House of Skulltula in Kakariko Village. The family has six members; five teenagers and their father. However, due to their greed, every member of the family have been transformed into mutant Skulltulas. To break the curse, the father of the family asks Link to collect Gold Skulltula Tokens; shiny golden emblems left behind by defeated Gold Skulltulas found all over Hyrule. For each 10 tokens that Link collects (up to 50 tokens) a teenager will be returned to their original shape and present Link with a reward. When Link destroys all 100 Gold Skulltulas, the curse on the father is broken as well.

The House of Skulltula has many spider webs and eroded bricks, implying that it is one of the oldest buildings in Kakariko Village, an early Sheikah village. The Sheikah distinctions are their pointed ears and red eyes, but since the eyes of the Skulltula family are always closed, it is impossible to see the iris color to determine whether they are Sheikah or Hylian. However, when they are in their spider forms, their open eyes have black irises, possibly a result of the curse. 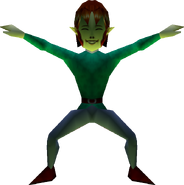 Retrieved from "https://zelda.fandom.com/wiki/Fabulously_Rich_Family?oldid=516804"
Community content is available under CC-BY-SA unless otherwise noted.