Zelda Wiki
Register
Don't have an account?
Sign In
Advertisement
in: Enemies, A Link to the Past Pages with Invalid or Missing Terms, Common Enemies and Traps,
and 13 more 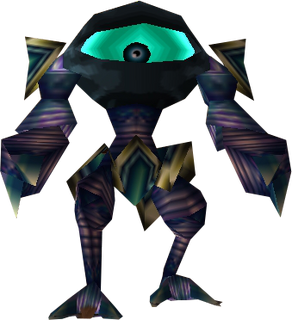 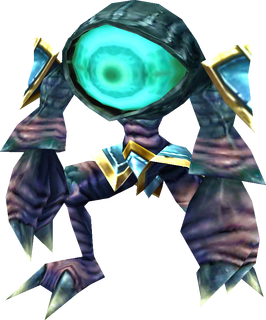 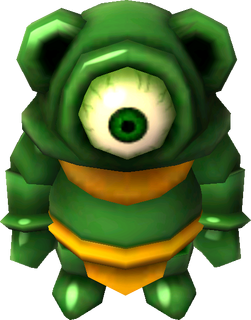 Bow
Sword
Eyegores,[2][note 1] also known as Eyegore Statues,(TMC)[5] One-Eyed Stone Statues,(TMC)[6], and simply Eyes,(TMC)[7] are recurring Enemies in The Legend of Zelda series. They are large, Cyclops-like creatures with tough defenses that make them impervious to most attacks, with their key weak spot being their single eye. Eyegores are weak to projectile weapons, especially to the Bow and Arrows, which in some cases are the only weapons that will inflict any damage onto them.

In A Link to the Past, Eyegores can be found in the Eastern Palace and the Desert Palace, and later in Ganon's Tower. They stand still until they are approached, when they open their eye and charge at Link for a brief moment. Only when their eye is open are they vulnerable to attacks. Eyegores are split into two groups; Green Eyegores and Red Eyegores. Green Eyegores can be defeated with just the Fighter's Sword, but they are durable and require many hits to defeat. An Arrow or a thrown Pot straight in the eye defeats them instantly. Red Eyegores are completely immune to all attacks even when their eye is open, except to Arrows. Two Arrows will defeat Red Eyegores.

Decorative Eyegore statues also appear in various dungeons in both the Light and Dark World, and one in particular is key to solving a specific puzzle. Some of them also hold Telepathy Tiles.

In Majora's Mask, Eyegores are hulking monsters with slender bodies and large heads, which consist solely of their eye. Only two of them appear in the Stone Tower Temple. They stand dormant until approached. Once awake, they will creep forward and fire beams at Link from their single yellow eye. They will also slam the ground with their fists to send rocks flying at him. When Link has been warded off, they will quickly retreat to their point of origin and become dormant again. Eyegores can be stunned by aiming the Hero's Bow or Hookshot at their eye, thus leaving them open to further attack. They can only be damaged when their eye is yellow.

In Four Swords, Eyegores appear as stone statue-like monsters with horns and a prominent single eye. Initially, they are dormant, but awaken and hop after Link when approached. They can appear in any stage, including the Realm of Memories and Hero's Trial in Four Swords Anniversary Edition.

In Four Swords Adventures, Eyegores will awaken and charge at the Links in short intervals when approached. They can only be attacked by shooting Arrows into their eyes. Eyegores can only be found in the Desert Temple.

Eyegore Statues appear throughout the Castor Wilds in The Minish Cap. They stand stationary in a dormant state, often blocking the path to other areas of the marsh. They will only activate once shot in the eye with an Arrow from Link's Bow, after which they will attack by jumping towards him. They are slow, as they must hop in place to turn around. Eyegore Statues can be destroyed by shooting them in the eye with three Arrows, not counting the first Arrow used to activate them. A single Light Arrow will also destroy them. Eyegore Statues will often drop a bundle of Arrows once defeated. Link can also simply run past the Statue once it jumps out of the way.

In A Link Between Worlds, just like A Link to the Past, Eyegores are split into three groups; Green Eyegores, Blue Eyegores, and Red Eyegores. Eyegores stand dormant until Link comes near, when they awake and quickly charge at him. They, however, no longer require the Bow to be defeated and can be attacked with any conventional weapon. Their eyes also brightly glow in pitch dark spaces whenever they are open. A group of five Red Eyegores are also fought as Sub-Bosses in a dark room of the Thieves' Hideout.

In the A Link to the Past comic by Shotaro Ishinomori, Link encounters an Eyegore during his visit to the Palace of Darkness. Although Link had been able to sneak around the palace using Zora's Mask as a disguise,[8] he is eventually discovered by an Eyegore.[9] The Eyegore warns Link of what could happen if he set off the Firecorn in the Palace,[10] but the hero disregards its warning and takes a Hinox's Bomb belt that was wrapped around it.[11] After the Eyegore summons Gleeoks to attack Link, the hero makes the Firecorn explode, destroying the entire Palace and, with it, the Eyegore.