Zelda Wiki
Register
Don't have an account?
Sign In
Advertisement
in: Locations in Oracle of Ages, Islands, Labrynna,
and 2 more
English 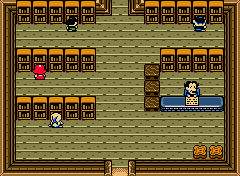 Eyeglass Island Library in the present

The Eyeglass Island Library is a location in Oracle of Ages.[1] It is situated on its own small island, named Eyeglass Island (hence the name of the library), which is found in the northern Zora Seas. The library is essential to the game's plot; it allows Link to cleanse the Zora Seas and enter Jabu-Jabu's Belly in order to obtain the penultimate Essence of Time, the Rolling Sea.

The Eyeglass Island Library exists in both the past and the present. Originally, the library will be abandoned, inaccessible to outsiders. In the past, the library can be opened by unlocking it using the Library Key, given to Link by King Zora in the hopes that he can research the cause of the filthy seawater which has left Jabu-Jabu ill.[2]

It is from this library that Link learns of the Fairy Queen, the guardian of the sea. Upon meeting the Fairy Queen in the past age in a cave just west of the library,[3] Link finds her under a curse placed on her by none other than Veran, the Sorceress of Shadows.[4] In this state, the Queen Fairy was unable to defend the seas against Veran's curse, which is the cause of the filthy seawater.[5] To return the Queen Fairy to her former self, Link must obtain the Fairy Powder which is locked away in the back room of the library in the past.[6][7] To do so, however, Link must obtain the Book of Seals guarded by an Old Man in the back room of the library in the present.[8][9] This book completes a set of books in the past.[10] The Books of Seals help Link follow an invisible path within the back room of the library, which is otherwise nothing more than an endless pit. Once Link reaches the center of the room, an Old Man will commend Link's efforts and offer him the Fairy Powder.[11]

With the Fairy Powder, Link is able to lift the curse on the Queen Fairy, who will then cleanse the seas.[12] This cures Jabu-Jabu's illness, allowing Link to enter Jabu-Jabu's Belly.

In a Linked Game of Oracle of Seasons, a Ghini living in the lone house on the Western Coast will reveal to Link a secret known only by the librarians of Eyeglass Island, the secret which he says made him a Ghini (as he also worked in the library).[13] If this mysterious secret is told to the Old Man who guarded the Fairy Powder in the back room of the library in the past, he will offer Link the Mirror Shield in exchange for his silence.[14]