Zelda Wiki
Register
Don't have an account?
Sign In
Advertisement
in: Objects, Symbols, Symbols in A Link to the Past,
and 17 more

It has been suggested that the portion of this page concerning Sheikah Eye should be made into its own page. Should the target page already exist, this content should be merged into it where appropriate. Discuss this on article's talk page. 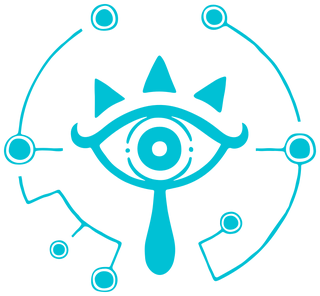 The Eye Symbol in Breath of the Wild

Super Smash Bros. Melee
Super Smash Bros. Brawl
Hyrule Warriors
Super Smash Bros. for Nintendo 3DS / Wii U
The Eye Symbol is found in throughout The Legend of Zelda series, and is often associated with the Sheikah tribe. According to the Encyclopedia, the teardrop on the symbol comes from the willingness of the tribe to go to any lengths.[1]

Main article: Crest of the Sheikah

Other Appearances of the Eye Symbol

In the opening of A Link to the Past, the Master Sword is depicted with a similar eye symbol on the hilt.

Elsewhere, Agahnim is frequently associated with an eyeball symbol quite reminiscent of the Sheikah insignia, albeit with the traditional eyelashes both above and below the eyeball, no teardrop, and with a thinner pupil. Like the Shiekah, Agahnim was an eerie figure who had posed as an advisor to the Royal Family and used arcane magics to protect them. While Ganon identifies Agahnim as his alter ego,[2] it seems likely that Agahnim was either posing as a Sheikah or more simply exploiting their aesthetic in order to get close to the Royal Family. 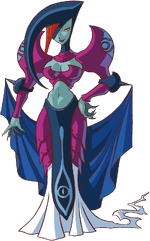 Veran bearing an Eye Symbol on her gown

In Oracle of Ages, the sorceress Veran bears a similar eye emblem oriented vertically, with no eyelashes and with the teardrop, extended, extending upward from one corner of the eye, and has red eyes common to the Sheikah. Her lair in the highest part of the Black Tower also includes pillars bearing the standard Sheikah emblem. Like Agahnim, her role as a treacherous advisor to royalty and her use of elemental shadow magic imply that she has either a genuine link to the Sheikah or is drawing upon their mystique as part of her scheme.

In The Minish Cap, the Minish Vaati used the magic of the Mage's Cap to take the shape of a humanoid sorcerer, and later conquered Hyrule Castle, covering it with symbols of a baleful red eye. Vaati's new humanoid form had pointed ears, red eyes, and white hair, much unlike the Minish, and he eventually further transformed into an inhuman demonic form whose most prominent feature was a giant eye with stylized eyelashes, strongly reminiscent of the Sheikah emblem. This, along with his frequent use of occult magic, implies he may have been inspired by the Sheikah. The eye symbolism follows him to his chronologically later Four Swords appearance, and in Four Swords Adventures he is even followed by a group of female mages somewhat reminiscent of the implied matriarchal bent of Sheikah culture.

In The Wind Waker, Baito has a tattoo on his back that resembles the Sheikah Eye Symbol.

Another appearance of the symbol would be with the Twili in Twilight Princess. It can be found on their artifacts, such as Midna's helmet and the Fused Shadow. It is also seen on their buildings and in places such as above Zant's throne.

In Phantom Hourglass, the symbol on the front of the Guard Notebook resembles the Eye Symbol.

In Skyward Sword, symbols resembling the Sheikah Eye can be seen on the Timeshift Stones found in the Lanayru Desert region.

In Tri Force Heroes the eye symbol is present on the back of Wallmasters and on the face of Totem Armos. There are also symbols that greatly resemble it on the Desert Zone's Triforce Gateway in the Den of Trials.