Zelda Wiki
Register
Don't have an account?
Sign In
Advertisement
in: Objects, Objects in The Legend of Zelda TV Series 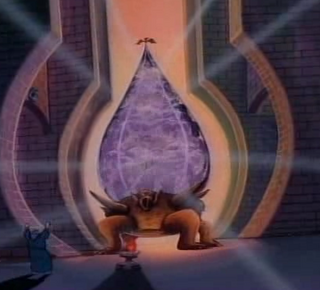 Keep Ganon's minions within until they are summoned when needed
The Evil Jar is a magical device used by Ganon in The Legend of Zelda TV series. Located in the Underworld, it contains all of Ganon's minions, and he is capable of summoning them from the jar at will. Any time Link zaps Ganon or one of his monsters with the Crissword, they are magically transported back to the Evil Jar, thus keeping them from disappearing forever.

Although other Hylians usually cannot be imprisoned within the Evil Jar, in "The Missing Link" episode, Ganon creates a Wand of Power that shoots a powerful spell capable of capturing its victim within the jar.[1] Although the evil wizard tries to capture Princess Zelda, the spell instead engulfs Link, whose body is imprisoned within the Evil Jar while his spirit remains in the overworld. Eventually, Link is reunited with his body and is able to escape from inside the jar by using a bomb, causing the Evil Jar to explode and flood the Underworld with the water that was within it.

Despite ostensibly being a prison for his minions, Ganon's underlings are able to break out of it quite easily, as shown in the episode "The Moblins are Revolting," where the monsters remove the eagle statue that covers the top of the jar, allowing all of Ganon's minions to escape.