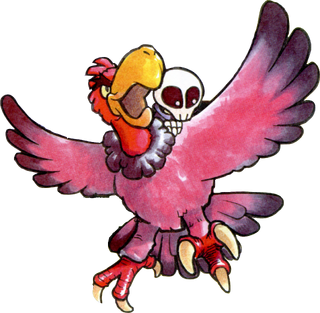 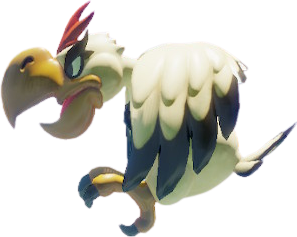 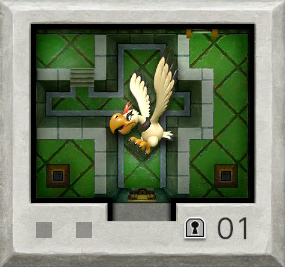 Nightmare of the Eagle's Tower[citation needed]

The Evil Eagle is the eponymous Boss of the Eagle's Tower and the minion of the Grim Creeper, the mini-boss of the same dungeon, in Link's Awakening.[1]

At the top of the tower, Link is met with Grim Creeper who had earlier vowed revenge on Link for killing his beloved Battle Bats.[2] The Grim Creeper, who threatens Link with his life, sends away his remaining bats and plays his flute to summon Evil Eagle.[3] Shortly after the Grim Creeper's jeering, the Eagle flies in and the boss battle begins.

Link can block most of the Evil Eagle's attacks using his Mirror Shield. Evil Eagle will fly back and forth across the screen at varying altitudes until Link hits him in the beak three times with any of the following weapons: the Sword, the Hookshot, the Boomerang, the Bow, or the Magic Rod. After three hits, Evil Eagle will hover to the side of the tower and either blow wind at Link and shoot little feathers (to combat this, Link should keep his shield up and walk towards the wind), or he will dive at him. If Link falls off the tower, he has to restart the entire battle. The Eagle is defeated with six hits from the Bow or L-2 Sword, and eight from the Hookshot or Boomerang.

It is possible to charge the L-2 Sword with a Piece of Power before the boss fight, which will allow Link to defeat Evil Eagle in three hits. It is also possible to use the Magic Rod to fight Evil Eagle, by skipping the boss battle and heading straight to Turtle Rock, as all that is needed to enter the dungeon is the Mirror Shield and the Frog's Song of Soul. Evil Eagle will go down in three hits to the Magic Rod, and will not attack directly if it is used.