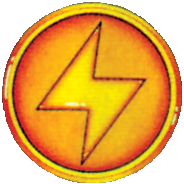 Defeating enemies
Freezing enemies
Accessing Misery Mire
The Ether Medallion is an item in A Link to the Past.[1]

The Ether Medallion can be found across a bridge west of the Tower of Hera, where a green tablet can be found. Link requires the Book of Mudora to translate its message, which instructs him to raise the Master Sword to the heavens. Once he does so, the lightning-based spell is cast, destroying the tablet as a result. Then, the Ether Medallion falls from the sky into Link's hands.

Ether attacks through the atmosphere, as flying enemies appear to be the most affected. Most enemies who are not destroyed by the initial pulse of lightning are frozen, as if they were struck by the Ice Rod. The Ether Medallion must be used to clear the rain in the Swamp of Evil in order to enter Misery Mire.