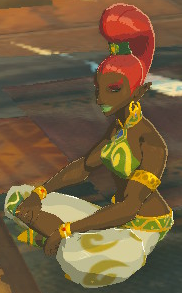 Estan is a character in Breath of the Wild.[2]

Estan is a Gerudo who manages a General Store in Gerudo Town. She sells a variety of cooked meat.

According to Maike, a merchant at the Kara Kara Bazaar, Estan is her little sister.[1] Maike tells Link that Estan knows Hylian well, recommending that he stop by and meet her.[3]

After Divine Beast Vah Naboris has been calmed, Estan is very grateful and thanks Link.[10]

Estan tells Link that she once traversed across Hyrule Kingdom in search for the best meats and learned common words in the Hylian language during her travels.[11][12] Although Estan knows some words in the Hylian Language, she usually mispronounces them, such as saying "tank you" instead of "thank you."[13]

When Link buys Estan's meats, she calls it a good purchase.[21] If Link has bought all of her wares, she thanks him.[22]