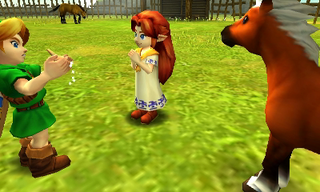 The full version of Epona's Song is in binary form, with 16 bars in both the A section and B section for a total of 32 bars with a 4-bar intro. The entire piece consists of 4-bar phrase lengths, is played with a slight eighth-note swing, and is in 3/4 time. It should be noted that this is the only piece in the whole game the uses a swing eighth-note rhythm. Even more unusual is the fact that the vocal part does not follow the swing rhythm and instead plays it straight, a technique commonly used to create rhythmic clash and a little bit of tension.

In Ocarina of Time, "Epona's Song" can be learned from Malon, Epona's owner, in Lon Lon Ranch when Link is a child.[4] Initially, Link can play this on his Ocarina to tame Epona and beck her to come. After the horse is won from Ingo at Lon Lon Ranch, playing the song as an adult allows Link to call Epona and ride her. Whenever this song is played, Epona travels to wherever Link is in Hyrule Field, Lake Hylia, Gerudo Fortress, and some other outdoor areas.

If Link has an Empty Bottle, "Epona's Song" can also be played around cows to earn Milk.[5]

Malon can be heard singing this song in Hyrule Castle as a child or at night at Lon Lon Ranch as an adult,[6] depending on how much the game has progressed.

"Epona's Song" can also be played on Link's Ocarina to call Epona in Majora's Mask, but only after Link first finds her in a pen at Romani's Ranch. Once again, it is only effective in areas Epona can reach, such as Termina Field or certain portions of Great Bay Coast. "Epona's Song" is taught by Romani after Link agrees to help her save the ranch from the Ghosts.[7]

"Epona's Song" makes a cameo appearance in The Minish Cap. Every time Link speaks with Malon, this melody will play.

"Epona's Song" appears again in Twilight Princess. Rather than playing a musical instrument, Link must blow into a piece of Horseshoe Grass to perform the song and call Epona. Later on, the portable Horse Call allows this song to be played anywhere, instead of just where certain patches of grass can be found.

While in Wolf form, Link can howl the song to summon Epona whenever he is near a patch of Horseshoe Grass. However, he can only ride Epona while in human form.

Epona's song can be heard by various stables when Kass is at the stable. Kass will play Epona's song and at the Foothill Stable he will state that their are many theories as to this song's origins, though according to his teacher the Sheikah court poet who served the Royal Family of Hyrule before the Great Calamity, it is the song the ancient hero calls upon his horse.[8]

Epona's song will also be played at the fountain of Malanya in F major.

"Epona's Song" is part of the "Ocarina of Time Medley" in Super Smash Bros. Brawl, and it appears alongside other familiar melodies such as the "Song of Storms", "Zelda's Lullaby", "Saria's Song", and the "Song of Time".

"Epona's Song" makes a cameo appearance in Hyrule Warriors. Whenever Link completes certain stages, a cutscene depicting Epona riding will play and Link will race to catch up with her and subsequently ride her. In the following screens, "Epona's Song" will play instead of the standard post-battle theme.

"Epona's Song" appears as part of the "Ocarina of Time Medley" track in Super Smash Bros. for Nintendo 3DS / Wii U.

"Epona's Song" is featured as part of the "Ocarina of Time Medley" track in Super Smash Bros. Ultimate.

Calls in The Legend of Zelda series
Community content is available under GNU Free Documentation License unless otherwise noted.
Advertisement