"You got the engineer's clothes! They have a dove design on them, the mark of a true engineer!"
— In-game description

The Engineer's Clothes (機関士の服, Kikanshi no Fuku?) are an item from The Legend of Zelda: Spirit Tracks. This set of clothes is worn by Link at the beginning of the game. After his ceremonial promotion to Royal Engineer, Link meets Princess Zelda in her chambers in Hyrule Castle. After being asked to escort her out of the castle so that they can check on the Tower of Spirits, Link is given the Recruit Uniform, a green garb worn by recruits for the Hyrulean Soldiers, in order to disguise his identity and pass by the guards unnoticed. The Recruit Uniform then replaces the Engineer's Clothes. This uniform includes a hat, a coat and gloves. After retrieving 15 stamps for Niko, Link receives another pair, or possibly the same pair, of Engineer's Clothes into which he can change. 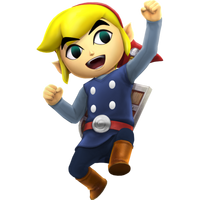 Link can be seen in the background of the Spirit Train stage wearing the Engineer's Clothes, unless a player is playing as Toon Link, in which case Alfonzo will take his place.

Retrieved from "https://zelda.fandom.com/wiki/Engineer%27s_Clothes?oldid=541554"
Community content is available under CC-BY-SA unless otherwise noted.