"The Claree Collection! As in a high-end collection curated by me, Claree. BUT OF COURSE. I personally selected each and every item in here using my flawless fashion sense. It's all HIGHLY recommended. Each item has its own unique features and abilities, so take a good look!"
— Claree

Enchanted is a shop from The Legend of Zelda: Breath of the Wild. It is an armor boutique owned by the Sheikah Claree at Kakariko Village. She sells the "Claree Collection", a high-end collection of fashionable clothes. Lasli works as a greeter and promotes the store to passersby. Like most shops in Breath of the Wild, Link can sell armor, materials, food or elixirs to Claree for Rupee. It is one of two Sheikah run Armor Shops in Hyrule the other being the Rare Armor Shop in Tarrey Town. The first Rumor Mill volume can also be found on the counter near Claree. One of Cado's escaped Cuccos can be found on the shop's roof.

"The stealth chest guard masks your movements and makes it hard for monsters to spot you. It'd come in real handy when I'm on the road, but at that price, it's out of my reach...just like the cutie who sells it."
— Bugut

It is the only shop where Link can obtain the Sheikah "Stealth" armor set which includes the Stealth Mask, Chest Guard and Tights. These pieces were sound suppression armored garments worn by the Sheikah tribe. They increase Link's Stealth when worn. These items are the most expensive, the entire set costs 1,800 Rupees. However, the worn set grants Link permanent Stealth boost and Night Speed Up set bonus after the three pieces are upgraded to Level 2 (★★) via Great Fairies.

This set was worn by Sheikah warriors that provided security for the Sheikah researchers and assisted the Royal Family in secret before the Great Calamity as shown in Rhoam Bosphoramus Hyrule's explanation of the events that lead to the Great Calamity and two of Link's Recovered Memories. However no Sheikah uses this armor set a century later not even Impa's bodyguards Cado and Dorian wear the set despite being talented warriors who guard the Sheikah Elder indicating it has fallen out of use among Sheikah in the century following the Calamity.

The traveling merchant Bugut reveals that he wishes to purchase the Stealth Chest Guard from Enchanted while staying in the Shuteye Inn though he is unable to afford it and laments both it and Claree (whom Bugut has a crush on) are out of his reach. Though Link can sell a Sheikah Chest Guard to Bugut, he will continue to note he is unable to purchase one from Enchanted regardless.

Additionally stealth armor is generally more suited for sneaking around and moving around quickly at night and the Sheikah were more active in supporting the Hyrulean army during the Great Calamity though with the army's collapse and presumably a century of dealing with the Yiga Clan with Sheikah opposing and/or some even joining the group as time went on reducing their numbers as while the Sheikah are more numerous only a few loyal Sheikah remain that are not Sheikah Monks or lived during the Great Calamity with most of the loyal population living in or being originally from Kakariko Village (including Pikango who left the village to explore the world as a travelling painter) with the exceptions of the ex-Yiga Dorian (who is unfamiliar with Pikango and originally came to Kakariko Village where he fell in love with a local woman who convinced him to turn his back on his clan) and Robbie's son Granté who was born in Deep Akkala at the Akkala Ancient Tech Lab. Thus the modern Sheikah have little use for said armor unless they leave the village and wish to get around undetected.

Claree also sells "Hylian" clothing set including the Hylian Hood, Tunic, and Trousers. These clothes can be also obtained at the Vestest Clothing Boutique of Hateno Village. A pair of Hylian Trousers can be obtained from a chest in the ruins near the Temple of Time on the Great Plateau thus Link can save money by only purchasing the Hood and Tunic or choosing to save up his Rupees to purchase the more valuable "Stealth" armor. The Hylian set is a common garb popular among Hylians and is made using traditional Hylian methods (presumably Sheikah have knowledge of it as most are implied to have some Hylian ancestry as Paya notes her family has a stronger Sheikah bloodline even though her great aunt Purah is the only family member with the Sheikah's traditional red eye color as Paya inherited her grandmother's brown eye color indicating even Impa and Purah may have a small amount of Hylian and/or Human ancestry).

"I wish the rain would take a hint and lay off for a while... The folks in Kakariko Village have really amazing clothes that let them work out in the rain with no problem. Amazing! But only the Sheikah people can wear 'em, so they won't sell us any... Kakariko Village is a small village you can reach by following the road north of here. I came through there earlier. It's surrounded by tall mountains, and everyone there wears the same clothing. It's a strange little place, sort of like the original hidden village..."
— Sagessa

According to Sagessa at Dueling Peaks Stable, the shop refuses to sell to Hylians the rain resistant garbs worn by the Sheikah in Kakariko Village. This is due to those garbs being traditional garbs exclusive to members of the Sheikah tribe though ex-Yiga Clansmen that turned their back on serving Ganon are also permitted to wear them as shown by Dorian. Thus Link as a Hylian is unable to purchases them despite his heroic status. Like the Stealth set, these garbs have been used by Sheikah since before the Great Calamity as some of the Sheikah assisting in the Guardian research wear them in one of Link's Recovered Memories. However unlike the stealth set, these garbs continue to be worn by Sheikah a century later.

Paya, Impa, Purah, Robbie, Granté, Jerrin, and Symin all wear this type of garb. While male Sheikah garb features pants, female Sheikah wear a skirt though the length and design of the skirt varies. Paya's skirt is short with tights covering her legs a trait shared by the garbs worn by Koko and her sister though their clothing is child sized, while Jerrin and Claree wear long skirts that cover their legs up to their ankles.Purah's garb is the most unique as it features a frilled skirt and mary jane-like shoes and is apparently tailored to fit her after she regressed to a six year old child.

"Look at you, out in the rain with no umbrella! I'd lead you mine, but it's actually a special umbrella... Only members of the Sheikah tribe are permitted to use it. Sorry... Please don't catch a cold, OK?"
— Mellie

Some Sheikah wear special umbrella hats to cover their heads and Mellie will even note Sheikah are not allowed to lend these special umbrellas to non-Sheikah when she tells Link she is unable to lend him hers. Impa wears a large ornate umbrella hat with metal weights attached around its brim. Some Sheikah Monks wear hats similar to Impa's though without the metal weights. Paya, Cottla, and Koko do not wear these hats and take shelter indoors when it rains or in Koko's case under the shade of the tree in the local graveyard whenever it rains while visiting her late mother's grave in secret. Despite seeking shelter, Paya herself appreciates the rain and cannot understand why some do not like it. Koko also has come to like the rain as it hides her tears as she cries at her mother's grave as she tries to appear strong when visiting her mother's grave so her mother's spirit can rest in peace. However she does dislike when it rains while she is cooking dinner for herself and Cottla as it puts out the cooking pot she uses. However most Sheikah do not mind it thanks to their umbrellas and rain resistant garbs though the garbs only protect the body thus the umbrella hats are required to protect their head from getting wet. Pikango however wears his hat on his back and doesn't seem to mind his head getting wet presumably due to his life on the road travelling around Hyrule.

If Link talks to Dorian when he is on guard duty while it is raining, he can inquire about him about being soaked by the rain. Dorian notes while it may seem that way, he explains to Link about the garbs Sheikah wear. Dorian reveals despite giving up their more advanced technology they continue to use these garbs amongst their tribe though presumably do not sell them to non-Sheikah due to them being created through advanced standards or due to tradition is exclusive to Sheikah. 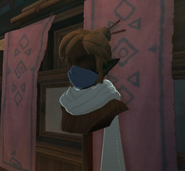 Stealth Mask on display at Enchanted 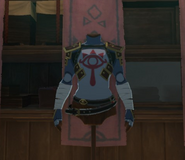 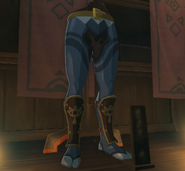 Stealth Tights on display at Enchanted 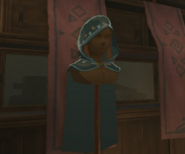 Hylian Hood on display at Enchanted 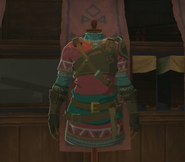 Hylian Tunic on display at Enchanted 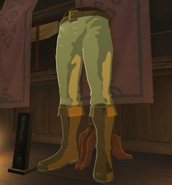 Hylian Trousers on display at Enchanted 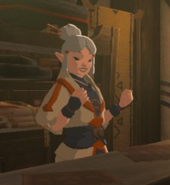 Claree the owner of Enchanted 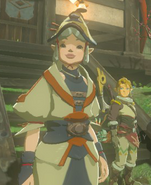 Lasli the greeter of Enchanted 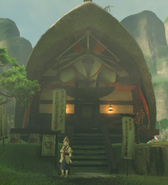 The exterior of Enchanted
Add a photo to this gallery

Retrieved from "https://zelda.fandom.com/wiki/Enchanted?oldid=545021"
Community content is available under CC-BY-SA unless otherwise noted.