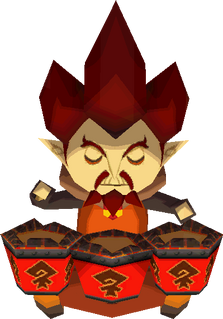 Guardian of the Fire Realm[1]

To gain access to Embrose's chamber in the Fire Sanctuary, Link must first quell the flames which engulf the Goron Village by delivering Mega Ice to the Gorons. He can then speak to the Goron Elder, who will grant him permission to pass to the Fire Sanctuary located behind the village. Opening the Door of Friendship in the sanctuary leads the young hero to Embrose, who introduces himself and mentions that he has heard of Link and Zelda's quest.[5] Embrose then proceeds to teach Link a Lokomo Song that restores the Spirit Tracks leading to the Fire Temple after the young hero and the enthusiastic Lokomo perform the duet together using the Spirit Flute and the timpani, respectively. Before departing for the temple, Embrose recommends to the young duo speak with the Gorons to learn about the dangers of the mountain.[6]

During the final battle against Malladus, Princess Zelda sings a duet with Link, and soon after this, all five of the Lokomos, including Embrose, join in to form a fully orchestrated version of the piece. This melody weakens Malladus and reveals a weak spot on his back, which is necessary to defeat the Demon King once and for all.[7]

Embrose is last seen during the ending credits when Anjean, along with the rest of the Lokomos, departs towards the heavens after the defeat of the Demon King since their protection is no longer needed in the land of Hyrule.[8]

Lokomo in The Legend of Zelda series
Community content is available under GNU Free Documentation License unless otherwise noted.
Advertisement