Zelda Wiki
Register
Don't have an account?
Sign In
Advertisement
in: Sanctuaries, Locations, Locations in The Minish Cap 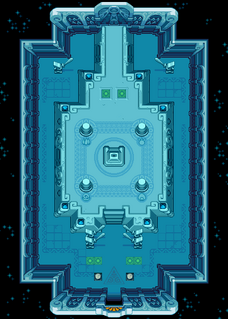 The Elemental Sanctuary in The Minish Cap

The Elemental Sanctuary is the gateway between the Minish Realm and Hyrule.[2] The entrance to the Elemental Sanctuary is located within the Palace Courtyard of Hyrule Castle and opens only once every hundred years. Apparently, it is only visible to children, and as such, not many even know of its existence. In the center of the main room stands a pedestal for infusing the Four Elements into the White Sword to create the Four Sword. A hidden room in the back also contains a set of stained glass windows which tell the story of the Light Force, the Hero of Men, and the Picori Blade.