The Electro Elixir is an item in The Legend of Zelda: Breath of the Wild. It temporarily grants Shock Resistance to Link when consumed. Like with Chilly Elixirs, Fireproof Elixir, Hasty Elixir, Mighty Elixir, Sneaky Elixir, Spicy Elixirs, and Tough Elixir, the duration and level of the Shock Resistance is determined by the ingredients used, the amount used, and whether or not critical success was achieved when Cooking it. Link can brew one by Cooking either a Electric Darner or a Thunderwing Butterfly with any monster or Guardian Parts. Link can also add health restoring effects to Electro Elixirs by adding extra ingredients such as nuts or "Electro" ingredients that add hearts such as Voltfruit, Voltfin Trout, and Zapshroom, though Link must use at least one "Electro" potion ingredient (Thunderwing Butterfly or Electric Darner) and one part (Guardian or monster) in the recipe.

The shock resistance granted by Electro Elixirs makes Link more resistant to enemy electric attacks, electric elemental weapons wielded by enemies such as Lightning Rod, and enemy Shock Arrows. Electro Elixirs are not actually necessary if he obtains the "Rubber" armor set which grants him max shock resistance (when all three pieces are worn as each piece adds one level of resistance) makes him Unshockable (when all pieces are upgraded to Level 2 or higher by a Great Fairy) which makes him immune to natural lightning damage and immunity to electric damage and shock effects as long as he wears the entire set. Electro Elixirs are however useful before Link obtains the entire armor set piece. Shock Resistances makes it easier for Link to combat electric enemies such as Electric Chuchu, Electric Keese, Electric Lizalfos, Electric Wizzrobe, and Thunder Wizzrobe which have the ability to shock Link which makes him drop weapons, bows, and shields (with the exception of the un-droppable Master Sword). However even at max level shock resistance (Level 3), it does not grant immunity, only resistant. 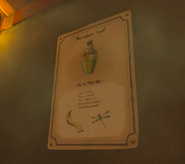 Retrieved from "https://zelda.fandom.com/wiki/Electro_Elixir?oldid=545016"
Community content is available under CC-BY-SA unless otherwise noted.