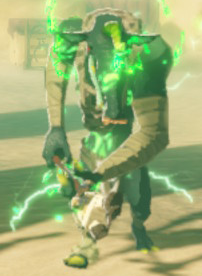 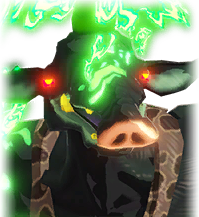 Electric Moblins are Moblins that are imbued with Lightning. These monsters can use their Spiked Moblin Spears or other spears to attack, however, they have more HP than the average Moblin, and can electrocute anything they hit. They have a similar charging attack to other spear moblins but their version creates an electric force field around themselves. When Electric Moblins swing their spear, they create area of effect damage around themselves.

They have no elemental weakness, unlike the Fire Moblin and Ice Moblin. They will drop parts of a Moblin, and one Lightning that can be used to replenish one part of a Lightning Rod. An Electric Moblin attempts to hurt the young Sidon after the completion of the EX Scenario Battle of Goponga Village, though it is thwarted by the adult Sidon before it could hurt his younger self.