Not to be confused with the Eldin Caves from Hyrule Warriors. 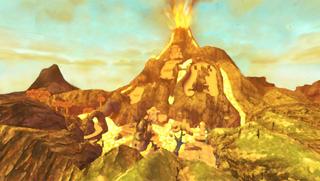 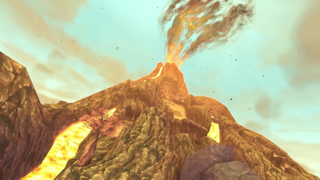 Eldin Volcano is a location in Skyward Sword.[1] It is the main feature of the Eldin Province, which is located on the surface world below Skyloft. It is home to the great protector of the Eldin Province, Eldin, the Fire Dragon. Deep within the volcano itself lies two of the game's dungeons: the Earth Temple near the top of the volcano and Fire Sanctuary within the Summit.

At some point in the past, Eldin Volcano was a peaceful and prosperous place where people both above ground and below lived together in harmony by the blessing of the great mountain. In the present, it has become an unfortunately dangerous and unforgiving place full of desolation and chaos.[2]

It is the second location on the Surface that Link visits on his quest to find Zelda. When Link arrives, he learns from the local Mogmas that Bokoblins have begun to appear all over Eldin Volcano, setting up Monster Strongholds and scaring off the Mogmas from the area.[3][4] Link ascends the Volcano and eventually reaches the entrance to the Earth Temple, where he sees Ledd and Cobal discussing how to get into the Temple. Overhearing their conversation, Link learns that Zelda has been captured and taken into the Temple by Bokoblins and that they broke the key that unlocks the door into five shards.[5][6] Cobal suggests to Ledd that they dig their way into the Temple instead of finding the Pieces of the Key.[7] The two Mogmas proceed to dig their way under the Temple to enter it, leaving Link to seek the hidden Pieces of the Key. After finding all five Pieces, Link assembles the Key and unlocks the door to the Earth Temple, which he enters to search for Zelda.

Later, Link returns to Eldin Volcano to complete Din's Silent Realm Trial. After completing the trial, Link acquires the Fireshield Earrings, which he uses to withstand the extreme heat near the peak of the mountain and safely travel to the Volcano Summit. Link ventures through the scorching cave and finds Gorko near the entrance to the Fire Sanctuary. He explains that pillars of flames are blocking the path leading to the entrance.[8] Link reads a riddle on a stone slab that suggests that using an Empty Bottle to pour Water on the tongue of a nearby frog statue will open the way. Link pours water on the tongues of two frog statues to put out the flames obscuring their path and reach the Fire Sanctuary. However, there is a larger frog statue at the entrance that requires much more water than the other statues.[9] Link returns to Lake Floria to ask Faron the Water Dragon permission to use the Water Basin she was recuperating in to extinguish the pillar of flames blocking the entrance to the sanctuary. After Faron grants Link permission to use the basin,[10] Fi summons the Ancient Robot Scrapper and requests him to carry the basin to the Volcano Summit. Link has to protect Scrapper from any enemies on the way up to the Summit.[11] Once they reach the Sanctuary, Scrapper dumps the Water Basin onto the large frog statue,[12] and the entrance to the dungeon opens.

Link visits the Volcano a third time to learn a part of the Song of the Hero from Eldin the Fire Dragon, but the Volcano erupts and Link is knocked unconscious while descending to the area. He is captured by Bokoblins, who have taken advantage of the eruption and annexed the entire Volcano. They steal Link's weapons and items and imprison him in a cell.[13] Plats digs his way into the cell and gives Link his Mogma Mitts, which he stole back from the Bokoblins,[14] to help him escape.[15] After he escapes his cell, Link has to infiltrate the camp that the Bokoblins have set up and retrieve his items one by one. In the following order, Link retrieves his Gust Bellows,[16] Clawshots,[17] Whip,[18] Slingshot and Bombs.[19][20] During this time, Link cannot return to the sky because of the clouds of ash created by the eruption. After arriving at the Volcano Summit, Link locates the Master Sword, and reunites with Fi.[21] The rest of Link's gear is inside his Adventure Pouch, which is located in a Treasure Chest deeper inside the Volcano Summit.[22] After Link meets Eldin and learns his part of the Song of the Hero, the Fire Dragon reveals that the volcano's eruption was an explosion of his power, and apologizes to Link for getting him caught up in it.[23] The volcano finally calms down, the skies clear up,[24] and the Bokoblins disappear from the area.

Eldin Volcano is an active volcano that consists of lava and magma. It is an area so hot that entering its Summit without the protection of the Fireshield Earring will result in Link taking damage. Prominent throughout the mountainous area are ancient ruins resembling the architecture of the Earth Temple and the Fire Sanctuary located nearby. Bomb Flowers are an essential item to exploration of the Volcano and can be found blooming throughout the area. Link can use them to destroy pathways and caves blocked by large rocks.[25][26]

According to Fi, 65% of the Volcano is covered by lava, and a large number of creatures manage to thrive in the extreme heat. Eldin Volcano contains many steep hills that Link must climb, and Bokoblins use ledges on these hills as vantage points from which to throw boulders at Link as he attempts to scale the mountain. The Volcano area also has caves, an underground section, and a small number of scattered Mogma and Bokoblin villages.[27]

The treasure-hunting Mogma race can be found scattered throughout the area, giving information on the Volcano's hidden treasures, which include green, blue and red Rupees, the rarer silver and gold Rupees, as well as frequent Amber Relics and Eldin Ore.[28] The Digging Mitts are also obtained here after Link helps a Mogma clear out a group of red Bokoblins while exploring the Volcano. These Mitts can be used to dig into mounds of dirt where Eldin Ore and Rupees can be commonly found.[29][30]

There is a mini-game, Thrill Digger, that involves the use of the Digging Mitts and is run by a Mogma named Tubert. It involves digging up holes for Rupees in an attempt to earn more than the amount initially spent on it. If Link digs up a bomb, he loses.[31]

In some Norwegian dialects and Swedish, Eld means fire, which is convenient for the Volcano's theme.[32]