Not to be confused with the Eldin Region in Breath of the Wild. 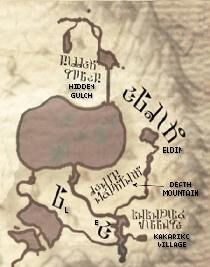 The Eldin Province is a recurring location in The Legend of Zelda series.[1][2] The province was named after Eldin, one of the three dragons of the Era of the Goddess Hylia.[3][4]

This region of Hyrule is the second one visited by Link, which is entered after obtaining the Fused Shadow from the Forest Temple. As with the Faron Province before it, he finds that the province is also covered in Twilight. After restoring Eldin's light and lifting the province's Twilight, Link scales up Death Mountain while seeking the second Fused Shadow and bests the Gorons at a sumo match,[5] who then allow him to enter the Goron Mines and retrieve the Fused Shadow after the defeat of Fyrus. This is also the area in which Link must battle King Bulblin in order to rescue Colin. Later on in the game, the young hero must return to the Eldin Province to locate the Hidden Village and eventually obtain the Ancient Sky Book from its only resident, Impaz.

The two final battles against Ganondorf are fought in the Hyrule Field section of the Eldin Province.

In Skyward Sword, the Eldin Province is protected by a great Fire Dragon of the same name who was appointed to oversee the region by the goddess Hylia.[6] It is a powerful region, covered mostly in lava by its active volcano,[7] and home to the treasure hunting Mogma tribe. It is situated northeast of the Lanayru Province and northwest of the Faron Province. A large portion of the province has been taken over by a large force of Bokoblins, setting up Monster Strongholds, and scaring off the local Mogmas. When Link first arrives, the Mogmas are suspicious of him, thinking he is one of the "red creeps." However, they grow to accept him, and reward him with the Digging Mitts for fighting off the Bokoblins. It is in this region where Link first encounters Impa as a figure dress in black. After completing the Earth Temple, Link finds Zelda and Impa in the temple's spring. However, Impa sends Zelda through a portal and scolds Link for his inability to protect her, claiming that she does not believe him to be worthy of becoming the Hero chosen by the Goddess.[8]

Afterwards, Link returns to the Eldin Province in order to complete Din's Silent Realm and receive the Fireshield Earrings,[9] which allow him to traverse the heat of Eldin Volcano and enter its Summit in search of the Fire Sanctuary. Inside, he battles Ghirahim a second time. After defeating him, Link will be able to temper his sword with the final flame, Din's Flame, transforming it into the Master Sword.[10]

Link returns to the Eldin Province once more in order to learn Eldin's section of the "Song of the Hero". However, due to an explosion caused by Eldin,[11] the volcano erupts, upsetting the region and filling the sky with ash. Before Link is able to land, he is blown away by the explosion. He awakens to find that he has been captured and imprisoned by the Bokoblins who have now completely taken over Eldin Volcano. The Mogma Plats burrows into Link's prison, telling him that while he was unconscious, the Bokoblins took all of his equipment and locked it into chests scattered throughout the region.[12] He proceeds to return Link his stolen Digging Mitts, with which Link is able to escape his prison and search for his missing gear. After recovering his equipment and working his way deep into the Volcano, Link arrives before Eldin, who presents his segment of the "Song of the Hero" and apologize for the explosion.

The province incorporates the name of Din.