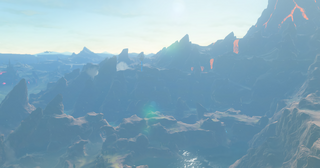 Eldin Canyon is a sublocation of Eldin in Breath of the Wild.[1]

Eldin Canyon is a vast area within Eldin, comprising of almost the entirety of the Region. The Canyon primarily covers southern and central Eldin, and stretches to the far northeast along the ends of Hyrule. The southern portion of the Canyon is a valley with rolling foothills that borders along Great Hyrule Forest, Hyrule Field, and northern Lanayru. A road paves through this section before forking between Eldin proper and Lanayru. This winding road then leads to the Foothill Stable before continuing into central Eldin. The valley is initially even and partially wooded, especially toward the west, however, further north it increasingly turns more rugged and mountainous closer to central Eldin.

The central portion of Eldin Canyon has harder terrain with steep cliffs and deep gorges. Further to the north and closer to Death Mountain, the landscape turns more perilous due to the area's high volcanic activity. Eruptions caused by Death Mountain have formed multiple bodies and rivers of lava around the area, as such as Darunia Lake and the moat that surrounds Death Mountain. Due to the intense climate, the Temperature grows exceedingly hot here, and puts Link in danger of catching fire along with any wooden Gear that is equipped. The high Temperature can be remedied either by consuming Food or an Elixir that grants fire resistance, or by wearing any one of the Flamebreaker Set. The road that paves through central Eldin Canyon eventually leads to Goron City, the home of the Gorons, before continuing to the Abandoned North Mine and finally Death Mountain.

The northernmost portion gives way to a mountainous, barren wasteland that has little to no substance. This area borders along the very edge of Hyrule as a steep, bottomless cliff known as Eldin's Flank. Eldin Canyon shares much of this landscape with the Eldin Mountains to the west.

Throughout Eldin Canyon, a number of bodies of water close to Death Mountain are Hot Springs, and will gradually recover Link's health as he stands or swims in them.

The Abandoned North Mine is a disued quarry located west of Goron City. It is denoted as Death Mountain Marker #6.[2] Yunobo comes to this Mine looking for painkillers to relieve Bludo's back, but becomes trapped in the Vault during a rock slide. The Mine is home to several Cannons belonging to Bludo, which when used in conjunction with the Remote Bomb Rune, can be used to fire cannonballs. Fire-Breath Lizalfos have built a number of outposts around the area.

The Bridge of Eldin is a bridge that connects to Death Mountain. It is denoted as Death Mountain Marker #8.[3] Bludo rose the Bridge to prevent Vah Rudania from crossing over, thereby making it inaccessible.[4] The Bridge is lowered after Yunobo, with the help of Link, strikes it down using a Cannon.

Broca Island is a tiny island situated in the eastern inlet of Lake Intenoch. The island's sole characteristic are a pair of stone formations. A steel block can be found in the water nearby, which when pushed into the island's stone formation using Magnesis, makes a Korok appear.

Cephla Lake is a large body of water in southeastern Eldin Canyon, close to the Foothill Stable. The Lake is mostly featureless save for an island camp where Lizalfos keep watch.

Darb Pond is a small body of lava south of Death Mountain that is connected by a strait to its moat. The pond flows into Medingo Pool through another, narrower strait. A pinnacle stands in the center of the pond, which holds a stone concealing a Korok. An Igneo Talus is buried in the eastern shore.

Darunia Lake is a large body of lava in northwest Eldin Canyon. The Lake is a significant part of the Abandoned North Mine, whose islands are situated in the Lake. The Isle of Rabac also sits on the Lake. Darunia Lake flows into the Golow River south, which itself flows into Goronbi River and Goronbi Lake. An Igneo Talus is buried in its western shore.

Death Caldera refers to the northern portion of the lava moat that surrounds Death Mountain. The Caldera, along with the moat, is fed by the Mountain's erupted lava.

Eldin's Flank is an expansive cliff that sits northern Eldin. It serves as the very end of northern Hyrule.

The Eldin Tower is a Sheikah Tower in southern Eldin Canyon. It stands atop the ledge of a small mountain.

The Foothill Stable sits on the foothills of Eldin Canyon, along the main road that leads to Goron City. The Stable is run by Ozunda, who manages both its Horse services and the inn. A nearby Ancient Shrine, the Mo'a Keet Shrine, sits on a cliff close to the Stable to the east, making it a convenient Travel Gate to the Stable.

A woman named Gaile notably sells Fireproof Elixirs at the Stable, invaluable for travelers aiming to trek into the Region's hotter climate.

Gero Pond is a small Hot Spring that sits next to the main road leading to Goron City, just outside of the main tunnel. A Guardian Stalker patrols nearby.

The Golow River is a river of lava that flows south of Darunia Lake. It flows into the Goronbi River, which itself flows into Goronbi Lake.

Gorko Lake is a small lake of lava located to the southeast of Goron City. An Igneo Talus is buried in a ledge above the Lake.

Gorko Tunnel is an underground tunnel located within the gorge between Gortram Cliff and Gorko Lake. The Tunnel is said to conceal the "secret of the hero", a secret that Bladon's brother, Gonguron, is aiming to uncover. Finding the Tunnel is integral to the Shrine Quest "A Brother's Roast". After Gonguron regains his energy by eating Rock Roast, it is discovered that the secret is the Kayra Mah Shrine.

Goro Cove is a body of lava to the east of Goron City. It consists of several jutting cliffs where lava falls flow through. The Cove is notably the location of a giant ribcage that sits in the lava.

Goron City is a small settlement where the Goron Tribe lives. It is situated in central Eldin Canyon, close to the base of Death Mountain, and is connected by a winding road that stretches between it and Foothill Stable. It is denoted as Death Mountain Marker #5.[5] A nearby Ancient Shrine, the Shae Mo'sah Shrine, sits on a cliff looking over the City, making it a convenient Travel Gate to the settlement.

The Goron Hot Springs are a small collection of Hot Springs situated along the road between Stolock Bridge and the Bridge of Eldin. They are denoted as Death Mountain Marker #7.[6] Two Gorons, Grapp and Dugby, can be found here.

Goronbi Lake is a lake of lava located in southwestern Eldin Canyon. It is connected by the Goronbi River north. A small island where the Qua Raym Shrine is found sits on the Lake.

Gortram Cliff is a gorge that runs between Goronbi River and Gorko Lake. At the southwestern end of the Cliff is a tiny lava pool, where Rock Roasts can be found nearby. The neighboring gorge is inhabited by monsters that guard the way to the northeastern end, where the entrance to Gorko Tunnel lies. During the "A Brother's Roast" Shrine Quest, Link is sent to retrieve Rock Roast from the Cliff.

The Isle of Rabac is an island in the shape of a crab situated in Darunia Lake, north of the Abandoned North Mine. It is connected by a mine cart rail that curves over the Lake from the Mine shore. Inside the island's crag is the Shora Hah Shrine.

Lake Darman is a lake of lava along the northern base of Death Mountain.

Lake Ferona is a body of water to the south of Eldin Tower. Due to the Eldin Region's hot climate, the Lake is warm and acts as a Hot Spring, and will recover Link's health as he swims through it. Luminous Stone Deposits can be found around the Lake's shore.

Lake Intenoch is a narrow lake extending from Lake Ferona. Like Lake Ferona, it is a warm Hot Spring, and will gradually recover Link's health as he swims in it. Broca Island is situated in the Lake's eastern inlet.

The Maw of Death Mountain, also known as the Climbing Path Trailhead,[7] is the main entrance into Eldin proper, through the main road that leads from Foothill Stable to Goron City. It is denoted as Death Mountain Marker #1, making it the first of a string of landmarks guiding the way to Death Mountain Summit.

Medingo Pool is a lake of lava in southeastern Eldin, sitting close to the main road. It is connected by a narrow strait that flows from Darb Pond. A Guardian Stalker patrols the area.

Pico Pond is a small body of water that sits close to the Woodland Stable, between Eldin Canyon and Great Hyrule Forest. The Mirro Shaz Shrine is located next to it.

The Shadow Hamlet Ruins are a ruined settlement that lie between Death Mountain's lava moat and the Shadow Pass of Akkala.

The Southern Mine is a small mining quarry that sits along the main road leading to Goron City. It is denoted as Death Mountain Marker #3.[8] The Mine is where the Gorons come to mine for Gems, which are an important resource to Goron City's economy.[9] The Goron miners work during the day, while the Goron children Pelison and Axyl play, and stop to rest at night until the next morning. A number of Ore Deposits can be found around the Mine. Fireproof Lizards are notably found in high numbers here.

A Hylian man named Kima asks Link to collect him 10 Fireproof Lizards, initiating the "Fireproof Lizard Roundup" Side Quest. Completing the Side Quest will reward Link with a Flamebreaker Armor.

The Stolock Bridge is a long bridge that crosses overhead Goron City, bridging the gap between the tunnel at the Abandoned North Mine and the road leading to the Bridge of Eldin.

Ternio Trail is the road that paves through southern Eldin Canyon between the Great Hyrule Forest and Lanayru Great Spring. The Trail eventually comes to a fork in eastern Eldin Canyon where it splits north to Eldin proper, and east to Lanayru.

Thims Bridge is a wooden bridge that crosses the river between Eldin Canyon and Hyrule Field.

Trilby Plain is a small grove to the southeast of Woodland Stable. Its most notable characteristic is a shallow pond where a Korok can be found.

Trilby Valley is a rugged valley located in southern Eldin Canyon. The Valley begins a transition of terrain between Eldin proper and the area bordering around Central Hyrule and Lanayru, featuring steep hills and cliffs.

The Woodland Stable sits on the border between Eldin Canyon, Hyrule Field, and Great Hyrule Forest.[10] The Stable is run by Kish, who manages both its Horse services and inn. The Mirro Shaz Shrine, which sits nearby next to Pico Pond, can be used as a convenient Travel Gate to the Stable.

Zelo Pond is a medium-sized pond that sits along the road in southernmost Eldin Canyon, between Woodland Stable and the fork in Ternio Trail. An isthmus passes between the Pond and the river right beside it.