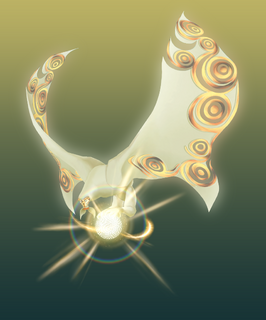 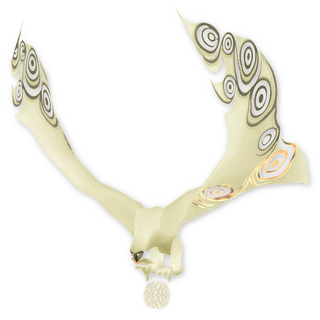 Eldin is the Spirit of Light who protects the Eldin Province in Twilight Princess.[2] The spirit takes a winged form, presumably that of an owl or other type of bird, and resides in Eldin Spring in Kakariko Village.[1] It is named after the dragon of the same name from the Era of the Goddess Hylia.[3][4]

Prior to the events of Twilight Princess, the Dark Interlopers tried to take over the Sacred Realm. Eldin, along with Faron and Lanayru, were asked by the Goddesses to intervene, and the Light Spirits sealed away the Interlopers' magic.[5]

As part of Zant's plan to take over Hyrule, the Shadow Beasts were ordered to steal the light of the Spirits.[6] Once Link gathers all the Tears of Light in Kakariko Village and Death Mountain, Eldin's power is restored and it returns Link to human form. It then tells Link that the dark power he seeks is in the sacred grounds of the Gorons,[7] and later directs him to the Lanayru Province to find Ilia.[8]

It appears again during the fight with Ganondorf when Princess Zelda asks the Spirits of Light for aid, whereas they combine their powers to create the Light Arrows. Once Ganondorf is defeated, the spirits return Midna to her true form.

Eldin's name is a reference to the golden goddess, Din.