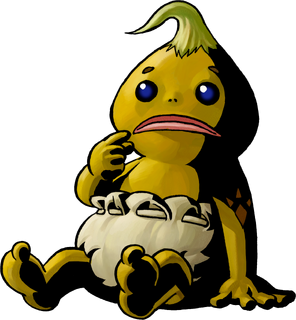 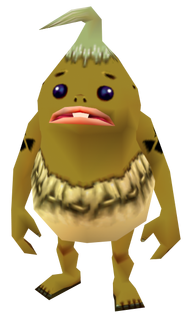 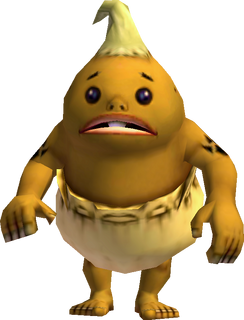 The Elder's Son is a baby Goron who has a rocky back, a large strand of straw-colored hair, large pink lips, and a cloth diaper. He even has the Goron Emblem on his arms, and, being young, he only has one tooth.

The Goron Elder's Son lives in the Goron Village and can be found crying inside the Goron Shrine. He wails so loudly that he extinguishes the Torches outside of his room.[4] The Gorons inside the shrine hold their heads to try and muffle the shrill, sharp sound of his crying. He is crying because his father, the Goron Elder, has gone out and has not come back.[5]

When Link melts the Ice entrapping the Goron Elder, he teaches him the introduction to the "Goron Lullaby", called the "Lullaby Intro."[6] To learn the rest, Link must play the Intro in front of his son, who will sing the rest of the notes.[7] After Link learns the full song, the Elder's Son will become calm and fall asleep, as will several of the surrounding Gorons.[8]

After Link defeats Goht in the Snowhead Temple, the Elder's Son will be waiting for him outside the Goron Racetrack. If spoken to, he will begin to cry, as the entrance to the Racetrack is blocked by a Boulder.[9] Link can open the entrance as Goron Link by blowing up the Boulder with a Powder Keg.[10][11] The Elder's Son will then root for Link in the Goron Races.[12][13]