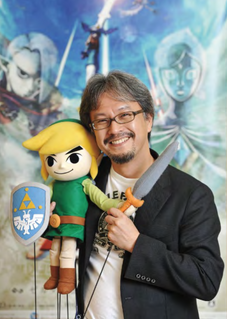 Producer of The Legend of Zelda series, Deputy General Manager at Nintendo

Nagano Prefecture, Japan
Eiji Aonuma is a video game designer, director, and producer. He is the current producer of The Legend of Zelda series and a Deputy General Manager at Nintendo.

Eiji Aonuma graduated from the Tokyo National University of Fine Arts and Music in 1988 upon completing a masters course in composition design, working on Japanese Karakuri puppets.[1]

Aonuma's grandfather and uncle were carpenters, and he has stated that watching them work as a young boy inspired him to do the same. Whenever there was drafting or craft homework from school, Aonuma would take the opportunity to use a hammer and nail to make creations of his own. Since his parents weren't in the habit of buying him toys as a child, Aounuma would create those himself as well.[2]

Aonuma's talent for wood cutting guided him through university, and would eventually lead to him being hired by Nintendo. During an exhibition where he was showing off his mechanical puppets, Aonuma encountered members of the videogame industry and took an interest in the kind of work they did. He learnt that Yōichi Kotabe, an accomplished animator that had worked on Heidi: Girls of the Alps, had also graduated from the same university, and had gone on to work with Nintendo, where he had created packaging for Super Mario Bros.. Upon learning this, Aonuma procured Kotabe's business card from his university and the two established contact.[3] Kotabe subsequently recommended Aonuma to Shigeru Miyamoto, who interviewed him and was impressed by his work, leading to his hiring.[4]

After he began working at Nintendo, Aonuma was assigned to the department that made games and served as a graphic designer on NES Open Tournament Golf. Since he had never been interested in videogames prior to joining the company, he turned to his girlfriend at the time and asked her to provide him with an introduction to games. Through her, he was exposed to the first Dragon Quest and the PC version of The Portopia Serial Murder Case, both developed by Enix (now Square Enix).[5]

Over time, Aonuma began to appreciate the fun of playing videogames and found himself particularly fond of A Link to the Past. After working on a number of projects in collaboration with external developers (including an unreleased game with Satoru Iwata of HAL Laboratory),[6] he eventually developed a game of his own: Marvelous: Another Treasure Island. The game was released in 1996 and drew inspiration from the A Link to the Past. Upon playing it, Miyamoto invited Aonuma to work with him and the Zelda team on The Legend of Zelda: Ocarina of Time.[7]

Aonuma would go on to serve as a dungeon designer and game system director on Ocarina of Time, and then as director on Majora's Mask and The Wind Waker. Exhausted by the development and subsequent promotional tour of The Wind Waker, Aonuma would request that he be allowed to step down as the series' director, but would instead be promoted to producer by Shigeru Miyamoto, who would ask that he take on a more supervisory role and focus on improving the series from a distance.[8]

In 2019, Aonuma was promoted to a Deputy General Manager at Nintendo, in addition to his role as producer of the The Legend of Zelda series.[9]

Aonuma is best-known for helping establish the conventions of the modern Legend of Zelda games, starting with Ocarina of Time, on which he served as a dungeon designer. He subsequently helped the series break away from the same conventions with A Link Between Worlds and Breath of the Wild in his role as series producer.[10][11][12]

On a number of occasions, Aonuma has recognized the need for the Zelda series to adapt to changing markets and audiences, both from a visual and gameplay standpoint. Twilight Princess and Phantom Hourglass serve as two notables examples of this, with the former addressing the need for a more realistic and mature Zelda game for the series' western audience and the latter being designed to combat declining video game sales in Japan.[13][14][15]

Both games achieved their respective goals. Twilight Princess eventually sold over 8.85 million units worldwide on the Wii and Gamecube consoles, reigniting interest in The Legend of Zelda series in western markets and allowing it to continue after waning enthusiasm for prior games had placed its future in doubt.[16] Phantom Hourglass sold over 900,000 units in Japan, making it the highest-selling Zelda game in that market in several years, and also helped successfully introduce the series to new audiences.[17]

With The Legend of Zelda: Breath of the Wild, Aonuma helped steer the Zelda series toward exponential growth, with the game having sold over 25 million units as of 2022.[18] Aonuma has stated that Breath of the Wild was the Zelda team's third attempt at creating an open-world game, with both The Wind Waker and Twilight Princess being more rudimentary attempts that needed to be held back in scope due to a lack of manpower and experience.[19][20][21]

In November 2016, Aonuma was awarded the Lifetime Achievement Award at the Golden Joystick Awards.[22]