Zelda Wiki
Register
Don't have an account?
Sign In
Advertisement
in: A Link to the Past Pages with Invalid or Missing Terms, Dungeons, Palaces,
and 3 more 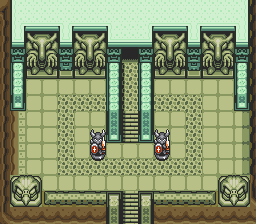 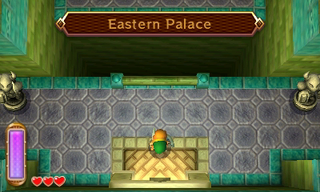 A Link to the Past
Bow

Eastern Palace guide
at StrategyWiki
A Link Between Worlds

The Eastern Palace,(ALttP | ALBW)[1] also known as the East Palace,(ALttP)[2] is a recurring dungeon in The Legend of Zelda series.

Entrance to the Eastern Palace

The Eastern Palace is found in the eastern side of Hyrule, inside a rocky canyon. Link enters the palace as part of Sahasrahla's test to see if he can overcome it and obtain the Pendant of Courage.

The dungeon's puzzles and obstacles are not too complex, but can appear daunting at first. The first major obstacle in particular involves huge rolling Balls sent down a main corridor, with some of them being bigger than others; Link must walk very carefully and get out of the way when a ball is approaching. This trap appears in a slightly different form deeper inside the dungeon, with balls appearing from all sides of the room. Eyegore, originally known here as Rocklops make their first appearance and provide a stiff challenge for an inexperienced player. The main treasure item is the Bow, which is located near the center of the dungeon in a large room filled with Stalfos, and Link will need it to defeat the Red Rocklops to reach the Dungeon Master. At the end of the dungeon, Link must fight six Armos Knights for the Pendant of Courage and a Heart Container.

Upon besting the palace, Sahasrahla will explain more about the Master Sword and the Knights of Hyrule, and will encourage Link to find the remaining pendants so that the Blade of the Evil's Bane can be claimed (the pendants' locations will be marked on the map as well). He also gives Link the Pegasus Boots.

Entrance to the Eastern Palace

The Eastern Palace is located in the east of Hyrule, hence its name. The dungeon entrance is located in a large structure with several statues along it. The palace shares many similarities with the previous version from A Link to the Past, such as enemy types and exterior architecture.

Link is sent to the Palace after Sahasrahla realizes his pupil, Osfala, is in danger. Sahasrahla tells Link to head there and tell Osfala of Yuga's plan to free Ganon.[3][4] However, before Link can get there, he must rent the Bow from Ravio to activate a door switch near the Palace entrance. The Bow also allows Link to navigate his way through the dungeon.

The dungeon is simple and only has three floors, and Ball traps remain a common obstacle. Link primarily uses the Bow to hit switches that change the levels of platforms.

At the end of the dungeon, Yuga turns Osfala into a painting and he and Link fight. Yuga responds to his loss by turning Link into a painting, which is not long-lived as Ravio's bracelet allows Link to return to normal. He then has the ability to merge with walls. After obtaining a Heart Container dropped by Yuga, Link uses his new ability to explore the outer walls of the dungeon.

The Compass is in a chest in the northwestern room of the first floor; the chest appears after defeating some Popos. It can then be accessed by entering through the room south of the chest and exiting through the north door. The Big Key can be found to the left of the room with the boss door, in a chest that is accessed after defeating some Stalfos.

In the A Link to the Past comic by Shotaro Ishinomori, Link travels to the Eastern Palace after being told by Sahasrahla's Grandson where Sahasrahla can be found. There, he finds the descendant of the wise men, and although he is puzzled as to how someone so young like Link could be searching for the Master Sword,[5] he tells Link he must recover the Pendants of Virtue to claim the legendary weapon. Sahasrahla reveals that he can help Link by giving him the Pendant of Courage, but since the task to finding the remaining two pendants will not be an easy one, he asks whether he will be able to accomplish said task,[6] to which the young hero confidently says yes both for Zelda and his deceased uncle.[7] Just as Sahasrahla hands the Pendant of Courage to Link, the Castle Soldiers pursuing Link find him. Empowered by the pendant, he easily dispatches their leader and sends the rest fleeing. The young hero, amazed at the power of the pendant, promises to find the remaining two pendants and leaves the palace to search for them.[8]