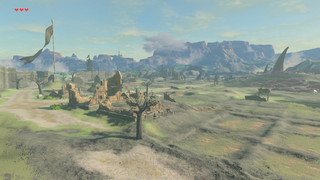 East Castle Town is a location in Breath of the Wild.[1] The Hyrule Cathedral and Castle Town Watchtower are within this location.

East Castle Town is located on the eastern side of the Hyrule Castle Town Ruins in Hyrule Field. It is an area that features many ruined buildings, dead Trees, and is covered in Malice. Near the center of the Town ruins, an unlit Cooking Pot can be found sitting near a wall. Deactivated Guardians can be found scattered through the ruins and can be searched for Ancient Materials.