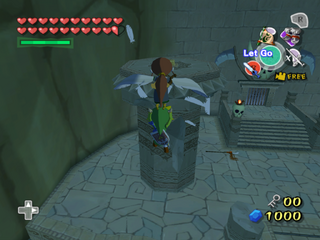 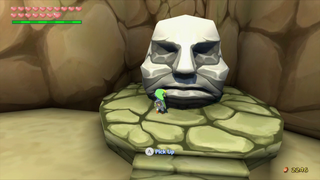 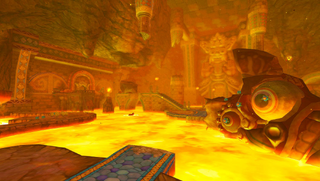 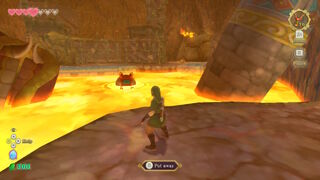 The Earth Temple is a recurring Dungeon in The Legend of Zelda series.[1]

It is located leagues beneath the Great Sea, directly below Headstone Island, in the now-sunken realm of Hyrule.[2] The main item obtained is the Mirror Shield, and its boss is Jalhalla.

Both the Earth Temple and the Wind Temple were constructed to safeguard the power to repel evil within the Master Sword, by providing a place for the two Sages to offer up their prayers to the Golden Goddesses.[2] The prayer song for the Sage of Earth was the Earth God's Lyric. When Ganondorf escaped to the surface of the ocean, he sought a way to deactivate the Master Sword.[3][4] He invaded the Earth Temple and murdered the Sage of Earth, the Zora known as Laruto.[5]

It was here that Laruto's spirit lingered on, awaiting the time when a new Hero armed with the Master Sword would come with a successor Sage to restore its power, and destroy the evil that now haunted the temple.[6]

Link comes to investigate what had become of the Sages of the Master Sword, and to restore the Master Sword’s power. He brings Laruto’s predestined successor, a Rito by the name of Medli, with him. Medli bears a harp identical to Laruto's, and they both play the Earth God's Lyric to break down the Stone Tablet that blocks the entrance to the Earth Temple.[7]

Inside the dark and eerie temple, Medli proves very useful in that she can fly, as well as reflect light off her harp.[8][9] Her harp is Link's only way of reflecting light until he finds the Mirror Shield, after defeating a group of Stalfos deep within the temple's interior. The pair works together to cleanse the temple of the evil monsters infesting it, and works their way to its deepest recesses, where they discover the entrance to the shrine chamber of Sage of Earth. Link enters the room and defeats Jalhalla using the Mirror Shield.[10]

After Link defeats Jalhalla, Medli enters the chamber and plays the Earth God's Lyric with Link, who conducts with the Wind Waker. This causes Laruto to appear one final time to play alongside them. This song restores part of the Master Sword's former power, and releases Laruto from her obligations, allowing her spirit to finally rest in peace.[11] Medli remains in the Sage shrine and sends Link back above ground to seek out the Wind Temple, where he could restore the Master Sword to its full power.[12]

There is a great focus on the duality of light and darkness which is portrayed throughout the temple. Much of the temple appears to be nothing short of a large tomb, with many coffins (several of which contained ReDeads) adorning walls and hallways. This is a trait shared with the Shadow Temple of Ocarina of Time as it too was, for all intents and purposes, a large tomb (the "House of the Dead," by name). The temple was constructed of many blocks and tiles, and was riddled with statues related to the fusion of the Sun and Moon, perhaps hinting at the duality of light and darkness, or of day and night. There are also several rooms that have large, scorpion-shaped mirrors, which are used to reflect light onto some of the statues, in order to open the way forward into the temple's deepest recesses.

As Link and Medli make their way through the temple, they will encounter several Stone Tablets similar to the one encountered at the entrance, which can only be destroyed when the young duo play together the Earth God's Lyric. The Command Melody is also heavily used by Link in order to control Medli to reach places that Link would otherwise be unable to reach, as well as to use her harp's ability to reflect light.[8][9] One very important element to completing the temple is the ability to reflect and control the flow of light. This underscores the importance of the temple's primary treasure, the Mirror Shield, in the way that the item is required at certain points, since it may take more than one reflection to proceed forward, as well the fact that the ability to reflect light is key to defeating the evil boss of the temple, Jalhalla.

The Earth Temple is a fire-based dungeon located up Eldin Volcano. Link visits the temple to locate the Earth Spring where Zelda is said to be cleansing herself.[13] However, before Link can enter, he must find five key pieces to the temple using Fi's Dowsing abilities, as hinted by a conversation between Ledd and Cobal.[14][15][16][17] The key pieces can be found in soft spots which Link can dig up with the Digging Mitts. The spots are: near the temple's entrance, beneath a wooden watchtower southwest from the temple's entrance, behind a bombable wall in the middle of the inclined sandy road in the center, in a rocky area accessible through a couple of geysers near the end of the western slippery sandy road, and within a bombable wall inside a lava-filled cave accessible after crossing the aforementioned western sandy road.

Like Skyview Temple, the Earth Temple shows signs of deterioration. It comprises only five (albeit cavernous) rooms, the fewest of any dungeon in the game.

A major part of the temple is traversed by logrolling on a large stone eyeball, as most of the central room and the east area is filled with lava. This ball must be released by shooting at the pockets containing Bomb Flowers. Enemies such as Fire Keese and Magma Spume will try to knock the young hero off the stone eyeball. Magma Spume can be rolled over and killed using the eyeball.

Lizalfos also appear frequently, and a pair of them are fought as the dungeon's minibosses. The dungeon's treasure is the Bomb Bag. It originally belonged to Ledd; the Mogma gives it to Link for helping him.[18][19] The dungeon is filled with Bomb Flowers, which can be used to solve puzzles or fill the Bomb Bag. The Boss of the Earth Temple is Scaldera, set upon Link by Ghirahim.[20][21]