Zelda Wiki
Register
Don't have an account?
Sign In
Advertisement
in: Enemies, Common Enemies and Traps, Reptilian Enemies,
and 4 more 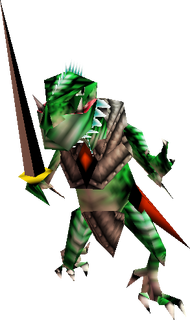 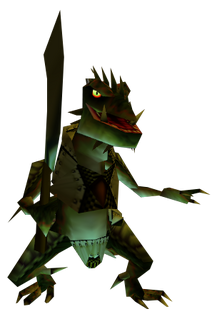 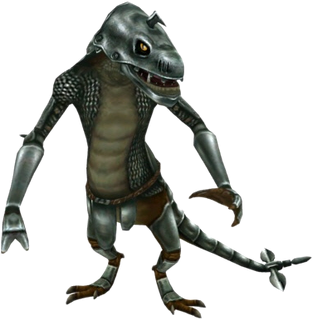 Dynalfos are armored saurian enemies that serve as a stronger variant of Lizalfos, which they are similar in appearance to. They are, however, physically larger and more menacing than Lizalfos, boasting spikes across their bodies, and the weapons they wield range from blades to axes. They also tend to confront Link alone rather than in pairs, as their weaker counterparts do.

Dinolfos appear in the Gerudo Training Ground and in Ganon's Castle in Ocarina of Time. In Master Quest, they can also be found in the Spirit Temple. They can be defeated by using the Shields to block their hits, and then attacking with the Swords once they let their guard down.

A Dinolfos first appears as the Mini-Boss of the Woodfall Temple, where Link must defeat it to receive the Hero's Bow. Dinolfos have an entirely new model. They wield a hand axe and are able to breathe fire, the latter trait making them dangerous foes for Deku and Zora Link.

Dynalfos appear in the Temple of Time in Twilight Princess. They can be easily defeated by counterattacking with Hidden Skills, and are susceptible to the Shield Attack and the Helm Splitter. They can also be pelted with Bomb Arrows from a distance. However, this strategy will only work before they can spot Link. The Ball and Chain can also be used to get through their shields, allowing Link to easily hack away with his Sword.

It is difficult to perform an Ending Blow on Dynalfos, as they are quick to jump back onto their feet once knocked down. However, it is still possible to execute the maneuver provided Link is fast enough.

Dinolfos appear as uncommon, elite Enemies in Hyrule Warriors, serving as Captains in several Forces. They resemble their Ocarina of Time and Majora's Mask incarnations, with the addition of an arm gauntlet they use to defend with. Their attack strategy is identical to their Lizalfos counterparts, including their innate weakness to Bombs, except they are significantly stronger and more aggressive. Dinolfos may attack with the swords they carry, or breathe fire either in the form of fireballs or a stream.

In the Scenario "The Dragon of the Caves" of Cia's Tale, a Dinolfos appears as a Coliseum Receptionist in Volga's Forces, called Dinolfos Chieftain. He is accompanied by a Lizalfos Chieftain, and arrives as reinforcements when Cia tries to enlist Volga into her army. The Chieftains are much larger and stronger variants of Dinolfos and Lizalfos. They also appear in multiple main story Scenarios that include Volga, such as "The Sorceress of the Valley", "Land in the Sky", all Scenarios in Cia's Tale except "The Demon Lord", and even in a mission in Linkle's Tale, "Powers Collide". The Dinolfos Chieftain is portrayed as Volga's loyal servant, and he and the Lizalfos Chieftain both apologize to their master when they must retreat during the battle with Ganondorf in the Scenario "Darkness Falls".[3]

When defeated, they may drop Dinolfos Fangs as bronze Material, or occasionally Dinolfos Arm Guards as silver Material.