Bow
Enemy Weapon
Shoots two arrows at once with one ammo

"A bow favored by the skilled archers of the Yiga Clan. It's been engineered to fire two arrows at once to ensure your target comes to a swift and none-too pleasant halt."
— Hyrule Compendium

The Duplex Bow is an item from The Legend of Zelda: Breath of the Wild. It is a bow obtained after defeating the Yiga Footsoldier bowmen who appear at random times or in the Yiga Clan Hideout. This bow was engineered and favored by the Sheikah Yiga Clan. It has been created to fire two arrows at once using only one ammunition. It has a base attack power of 14 though this may be increased by an "Attack Up +" weapon bonus.

The Duplex Bow can be seen as the Yiga Clan's answer to the Phrenic Bow used by Sheikah bowman like Cado and has apparently been engineered to be stronger in addition to firing twice as many arrows as its base attack power is greater than the Phrenic Bow which has an attack power of 10, however the Yiga Clan bow sacrifices durability for strength as the Phrenic Bow has greater durability. Both bows have the same range, though the Duplex Bow lacks the Phrenic Bow's first person firing attribute thus it is not as accurate, though this is mitigated by its ability to fire two arrows. Additionally both bows are made of wood and will burn when exposed to fire or volcanic temperatures but allows them to be wielded during thunderstorms without worry of attracting lightning.

It is one of the weapons and the bow required by Nebb during the side quest "The Weapon Connoisseur". Link must obtain one from the Yiga Footsoldiers who spawn at Karusa Valley in the Gerudo Desert region or Yiga Clan Hideout. After showing one to Nebb, Link can keep the bow. 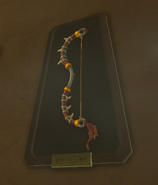 Retrieved from "https://zelda.fandom.com/wiki/Duplex_Bow?oldid=533257"
Community content is available under CC-BY-SA unless otherwise noted.