"I was a little worried about how we were going to find the shard, given how big this place is... This map will definitely come in handy! Let's go to the room that she marked and get that key!"
— Midna

Dungeon Maps (ダンジョンマップ, Danjon Mappu?) are recurring items in the Legend of Zelda series. They are most often found in chests, which are usually guarded by enemies. The Dungeon Map provides a roughly illustrated complete overview of the dungeon in which it is found and includes information on the multiple floors of a dungeon, if applicable. When used in conjunction with the Compass, the Dungeon Map can show where certain objectives can be found. In each game, the Map and Compass will guide Link to the room containing the dungeon's Boss, and in some games, the Maps will also direct Link to hidden treasures and other points of interest.

Sometimes, the Dungeon Maps do not display hidden rooms which can be found by breaking a weak wall with a Bomb, though they will sometimes be added once Link uncovers them.

Until the Dungeon Map is obtained, Link can make a makeshift map as rooms he already visited will be recorded on the otherwise blank slate that is meant to be filled in by acquiring the map. As the Dungeon Maps do not appear in Phantom Hourglass and Spirit Tracks, this method is the only way to acquire the map of the dungeons. As for the other titles, Link can use this method to complete the map of a dungeon without having to acquire the actual Dungeon Map, as long as he visits all the rooms.

In The Legend of Zelda: Breath of the Wild, the Sheikah Slate automatically provides a three-dimensional dungeon map for Hyrule Castle while the Divine Beast Dungeon Maps must be acquired by accessing terminals located inside them.

Unlike the later installments in the series, Dungeon Maps are not found inside treasure chests. Instead, they are usually found in one of the first few rooms of their dungeon, often not appearing until all the enemies in the room have been defeated. Using in conjuncture with the Compass shows Link where the Triforce of Wisdom is hidden; without the Compass, it only shows the location of the Triforce on a blank slate, or on a partially completed map depending on which rooms Link already visited.

The Legend of Zelda: Ocarina of Time and Majora's Mask

In these titles, Dungeon Maps are found inside treasure chests within dungeons. It also shows which treasure chests are opened with a different symbol on it, a feature that would be carried on to some future installments. Interestingly, all Dungeon Maps display an image of Dodongo's Cavern on them, regardless of the dungeon they are actually found in, and on it has the phrase "Nintendo Head Office" written in Hylian Alphabet.

Dungeon Maps in the Oracle of Ages and Oracle of Seasons have the same function and in-game sprite as Link's Awakening, and are located in treasure chests.

The Dungeon Maps in this game function in the same way as they did in previous installments, and are found in treasure chests, which usually appear when Link defeats all the enemies in a room. The artwork of the map has Hylian Alphabet written on it, with the title being "Dungeon Mab" (Mab being a misspelling on the original source); three messages on the side: "1. Traps are numerous", "2. Enemies are somewhat sparse" and "3. Carelessness is unconscionable"; a few pointers such as "Treasure", "Fountain", "Dead end" and "Boss"; the bottom with the message "Good fortune to the true hero".

The in-game sprite of the Dungeon Map is different from other two-dimensional games in the previous installments, but otherwise the map's locations and functions is the same. It also shares the same artwork as in The Wind Waker.

In Twilight Princess, Dungeon Maps display the name of their respective dungeon written in Hylian Alphabet. In Snowpeak Ruins, Yeta gives Link a mansion map instead of a Dungeon Map.

The Legend of Zelda: Phantom Hourglass and Spirit Tracks

Unlike in previous titles in the series, the maps in Phantom Hourglass and Spirit Tracks are displayed by default, and do not need to be obtained. Instead, the floors of a dungeon are revealed as Link enters that floor for the first time. This system allows the player to make notes directly on the map by utilizing the touch screen on the Nintendo DS.

In Skyward Sword, the Dungeon Map gains the function of the Compass from previous titles, showing the locations of Treasure Chests, Bird Statues, locked doors, and boss rooms.

In Breath of the Wild Dungeon Maps are 3D and frequently used to control certain aspects of the Divine Beasts. A similar dungeon map is used for inside Hyrule Castle, except it is acquired automatically and there is no function on the map. Hyrule Castle also appears on the overworld map with the location names of specific areas Link has visited inside the dungeon itself though this map is a two-dimensional layout of the castle from the perspective of the overworld as the Hyrule Castle dungeon has several outdoor areas inside the dungeon itself. However the dungeon map gives a far mor detailed map of the rooms and areas. Link can also access the Leave Area fast travel function by accessing the Dungeon Map which allows him to leave said dungeon by Warping back to its main entrance in the overworld. 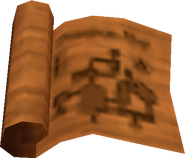 A Dungeon Map from Ocarina of Time

Retrieved from "https://zelda.fandom.com/wiki/Dungeon_Map?oldid=541198"
Community content is available under CC-BY-SA unless otherwise noted.