Not to be confused with Golden Bug and Gerudo Dragonfly, collectible dragonflies in Twilight Princess and Skyward Sword, respectively. 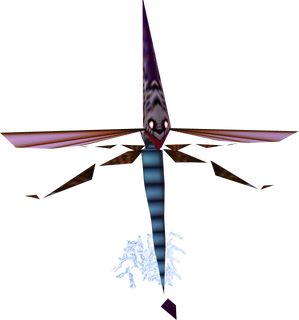 Dragonflies appear in the Southern Swamp. They possess electric tails that can electrocute Link and pose as threats that make flying with a Deku Flower difficult. They can be defeated with any weapon, but are especially vulnerable to projectile weapons, such as the Hero's Bow and Deku Link's Bubble Blast.

In Zelda's Adventure, Dragonflies[2] appear as enemies. Their appearance is more closely based on their real world namesake. They are rather weak and can be easily defeated by any of Zelda's weapons. They also have a high tendency of dropping Hearts when defeated. Dragonflies are first encountered in the Shrine of Air, but later also appear in the Vision Henge when Malmord combusts into a swarm of Dragonflies after being struck. These Dragonflies are notably the only enemies in the Vision Henge that will drop Hearts.