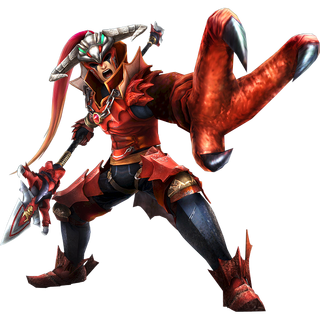 Defeating Enemies
The Dragon Spear is a class of Weapon used by Volga in Hyrule Warriors.[name reference needed] It is associated with Fire.

Volga's Dragon Spear is also a piece of gold Material, which may be dropped when Volga is defeated as an opponent.

Volga brings his Spear back, then thrusts it forward - carrying himself some distance ahead and burning the ground behind him in the process. This attack deals damage in a rectangular area ahead of Volga, and carries the Fire Element.

Spears in The Legend of Zelda series
Community content is available under GNU Free Documentation License unless otherwise noted.
Advertisement