Zelda Wiki
Register
Don't have an account?
Sign In
Advertisement
in: Locations in The Wind Waker, Islands, Mountains,
and 2 more
English 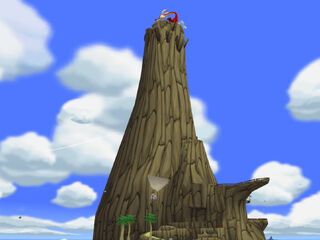 Dragon Roost Cavern
Dragon Roost Pond
Mail Center
Wind Shrine
Dragon Roost Island is a recurring location in The Legend of Zelda series.[1][citation needed] It is located in the northeast of the Great Sea, and is home to the Rito tribe and the Spirit of the Sky, Valoo. The game's second dungeon, Dragon Roost Cavern, is situated on this island. After successfully completing it, Link will receive the first of the three Goddess Pearls, Din's Pearl.

This article is incomplete.

Reason: Missing details about the area outside the second floor of the Mail Center
You can help by adding the missing information.

Dragon Roost Island can be seen from a great distance, as it primarily consists of a huge mountain. There are many explosive fruits scattered across the island, and many Kargarocs have made it their home. The planted bombs are necessary to blow up some rocks that prevent access to the inner area of the island. After the obstacles are cleared, it is a matter of walking through a wooden passage that leads to the shrine of the Rito tribe.

Around Dragon Roost Island are three secret Treasure Chests to be discovered. The first is in a secret Cave blocked by a boulder near the Wind Shrine. Defeating all the enemies in the Cave unlocks a door that leads to a chest containing a Purple Rupee. The second is a Cave behind the foot of the island that can be accessed by hovering across the steep rock formations with the help of the Deku Leaf and the Wind Waker. Link must be careful when dealing with Kargarocs while hovering to the Cave. Inside is a single Treasure Chest containing an Orange Rupee. The final Treasure Chest is found at the southwestern end of the island, atop a boulder high up against the wall of Dragon Roost. Growing near the boulder are several Bomb Flowers. Detonating one of the Bomb Flowers by piercing it with an Arrow or using a Hyoi Pear to bring a Seagull up to touch it engages a chain reaction; when the Bomb Flower nearest to the boulder explodes, the boulder will crumble and the Treasure Chest on top of it will fall to the ground. Inside this chest is a Silver Rupee.

The Mail Center is a small cavern close to the island base where the Rito make their home.[2] It doubles as the headquarters of the Island Postal Service.

Dragon Roost Island is home to the Wind Shrine, which can be found on the eastern side of the island. This Shrine has two stone monuments which honor the two Wind Gods, Cyclos and Zephos.