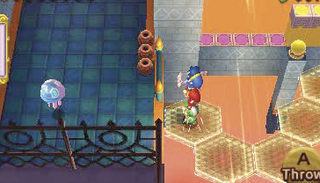 Dragon Citadel is a Level in Tri Force Heroes.[name reference needed] It is the third Level of the Sky Realm area.

Dragon Citadel takes place outside of a giant castle held high in the sky above the Drablands. As its name implies, it is home to a group of Aeralfos, who are fought in the last Stage. Like the Floating Garden, strong currents of wind blow through the palace corridors, which may push the Links off of the castle floors. Several types of platforms originally encountered in previous Levels make a reappearance: including glass tiles similar to the ice platforms from the Ice Cavern, the disappearing and reappearing platforms from The Ruins, and the colored tiles also from The Ruins, which only the Link whose color matches it can stand on. The Links also find Cuccos, which are used to glide over to other parts of the castle. The Magic Hammer, Water Rod and Boomerang are provided in the Level.

Dragon Citadel includes the following Drablands Challenges: "Halved attack and defense!", "Avoid the volcanic rocks!", and "Don't fall at all!".

Fortresses in The Legend of Zelda series
Community content is available under GNU Free Documentation License unless otherwise noted.
Advertisement