Zelda Wiki
Register
Don't have an account?
Sign In
Advertisement
in: Enemies, Dragons, Enemies in The Legend of Zelda TV Series

This article is about the dragon in the animated series. For other uses, see Dragon (Disambiguation).

It has been suggested that this article or section be merged with Dragon. 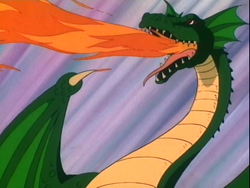 Crissword
The Dragon is an enemy appearing in "The Ringer" episode of The Legend of Zelda TV series.[name reference needed]

When an amateur magician makes a lizard appear on Zelda's hand during the Magician's Contest, Ganon uses his magic to turn it into a huge dragon that promptly turns towards the princess, causing her to scream in fear. Link immediately rushes down from his room to help Zelda, and although the young hero tries to defend himself from the dragon's fire by using his Magical Shield, the flame is too strong for him to be able to zap the dragon.[1] Zelda, who had managed to run away, then throws a nearby plate in the direction of Link,[2] and the young hero fires several sword beams at the plate which causes them to bounce back at the dragon, promptly defeating the monster. However, Zelda and Link soon learn that the dragon was just a diversion since Ganon had managed to steal the Triforce of Wisdom.[3]

Dragons in The Legend of Zelda series
Community content is available under GNU Free Documentation License unless otherwise noted.
Advertisement