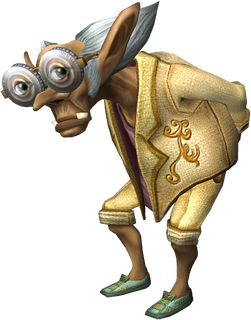 Dr. Borville is a character in Twilight Princess.[2] He plays a role in the restoration of Ilia's memory.

Dr. Borville is the sole doctor in Hyrule Castle Town, where he runs the Medical Clinic. A proud and avaricious man, he charges high fees for his services and has no interest in helping those who cannot afford them.[3][4][5][6] Dr. Borville boasts about people calling his hands "The Golden Mitts" and claims to have no trouble making money.[7] He changes his tune when shown his astronomical running tab at Telma's Bar.[8][note 1] He then claims not to have any money.[10]

When Prince Ralis falls ill on the way to Hyrule Castle Town, Dr. Borville refuses to treat the Zora child, stating it is beyond his expertise to do so.[11]

Dr. Borville is the first to bring Ilia to Telma's Bar.[12] He somehow obtains the Wooden Statue from Ilia with the intention of selling it.[13] Louise steals it from him when he leaves it out to dry after spilling medicine on it.[14][15] When Link visits the Medical Clinic after these events, Dr. Borville anxiously asks him in a low voice whether Ilia has said anything about him.[16][17] Dr. Borville denies having ever seen the Wooden Statue.[when?][18] When threatened with the Invoice, he admits the Wooden Statue was stolen from him.[13] If Link shows Dr. Borville the retrieved Wooden Statue, he will be startled and claim not to know what it is.[19][verification needed] He immediately contradicts himself by telling Link to return the Wooden Statue to Ilia.[20] If Link brings news of Ilia's recovery later on, he is startled by that too, but then claims to have predicted it from the beginning.[21]

Unlike the other residents of Hyrule Castle Town, Dr. Borville does not react to Wolf Link. This may be due to his poor eyesight.