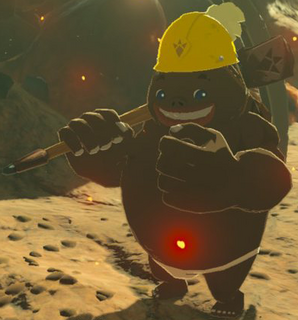 Dorill is a character in Breath of the Wild.[2]

Dorill is a Goron miner who works at the Southern Mine in Eldin Canyon. He is the head of the Goron Group Mining Company,[3] and takes direct orders from the boss, Bludo.[4] He spends the whole day mining, and at night he sleeps nearby with his son, Axyl.[5]

When Link first arrives at the Southern Mine, Dorill explains that his happiness is Bludo's, and is therefore the rest of Goron City's.[6] He's highly motivated to dig and sell the Ore he finds.[7] If Link asks about Goron City, Dorill will give him directions and warn him to take care not to get burned along the way.[8] He comments that Goron City is prosperous because of their work, though expresses that he would much rather mine at Death Mountain Summit if not for the Divine Beast Vah Rudania there.[9]

Dorill is driven to find as many Ore as possible in a day,[10] his target being one thousand pieces.[11] He has a great admiration for Bludo, as everything they do at the Mine is for him.[12] and encourages the other Goron miners to work just as hard.[13] He is especially eager to sell their Gems for a profit.[14][7]