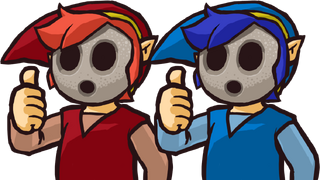 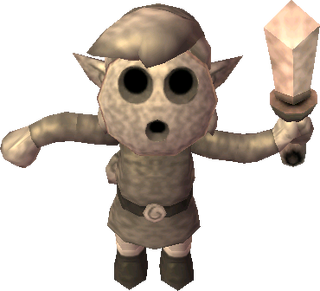 Doppels are wooden dolls that resemble the Links, but differ in that they appear to wear masks that resemble the Spooky Mask. Doppels act as vessels for a hero's soul, allowing Link to vacate his body and enter theirs.[1] They are used to accompany Link to the Drablands in a single-player game, wherein two Doppels are provided in place of the Links in Multiplayer modes, as three heroes are required to activate the Triforce Gateway to enter the Drablands.[4] The Doppels are kept in the Hall of the Doppels in Hytopia Castle, a room separate from the multiplayer communications lobby.[5] The Doppel Master keeps watch of the hall. Whenever Link wishes to venture into the Drablands, the Doppel Master will awaken the Doppels and bind them to his will.[6]

Though only one Doppel can be possessed by Link at a time, his soul can be transported to another Doppel at any time by tapping the Doppel Panels. When in a Totem formation, the top Doppel can be commanded to use a Sword or an Item by the Link at the bottom. Doppels cannot normally be damaged by external influences unless they are presently being possessed by Link. However, if a Doppel falls into a pit, Link will lose a Heart.[7] Doppels cannot be dressed in any Outfits, and default to the Hero's Tunic. As the Doppels are commanded by one being, Link and the Doppels also share the same Energy Gauge despite it normally being separate during multiplayer. Doppels in the Hall of the Doppels cannot exit the lobby, unless the current Doppel is the green-garbed one.[8]

During single-player while using the Doppels, the option to skip a Level's Stage is given. This will use up one of the three Fairies Link is provided with, which will bypass all obstacles and transport Link and the Doppels to the next Stage. Doing this has consequences, however, as skipping Stages will empty all of the Rupees Link has collected thus far. It will also decrease his bonus Rupees at the end of the Level, and a Material chest will be replaced by 20 Rupees for every Fairy used. Also, Levels that are cleared but have had Stages skipped will not be marked as completed on the Drablands Challenge Completion List in the castle lobbies.

Doppel is likely derived from Doppelgänger, a look-alike or a double of a living person.