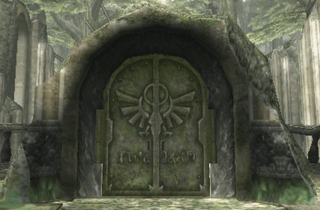 "Open Door of Temple of Time"(OoT)
The Door of Time is a recurring Object in The Legend of Zelda series.[1][2]

The Door of Time is located within the ruins of the Temple of Time in the Sacred Grove in Twilight Princess. It connects to the distant past to a time when the Temple of Time still stood. In this time, ancient technology such as the Dominion Rod retain their power. However, if the Dominion Rod is carried through the Door of Time, it will lose its power and rapidly age.

Doors in The Legend of Zelda series
Community content is available under GNU Free Documentation License unless otherwise noted.
Advertisement