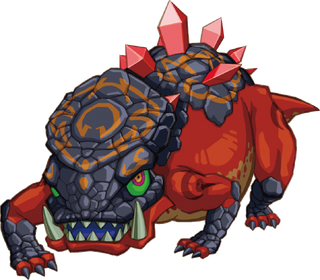 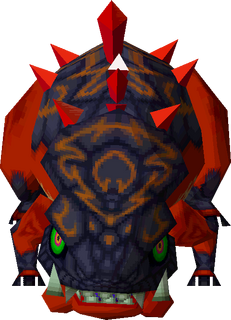 Dongorongo is a Dodongo-like Boss in Phantom Hourglass.[1] It resides in the fifth dungeon, Goron Temple.

Link enters a room with quicksand surrounding the center platform. Link cannot cross the quicksand, as there is no bridge. However, Gongoron comes out of a hole in the wall behind Dongorongo and offers help to Link. The objective is to dodge the fireballs that Dongorongo blasts from his mouth and to avoid him when he charges at Gongoron. When the young goron dodges the charge attack and Dongorongo bashes his head against the wall, he gets stunned for a few seconds, Gongoron can slam him from his side into a state where he is stunned for several seconds, which can be done by either tapping the boss's back rapidly, or by simply rolling Gongoron around to Dongorongo's side, as well. During this Critical Point, Link must send a Bombchu into Dongorongo's mouth, which will then explode inside of him.

As a word of caution, Link must occasionally take control of himself during Gongoron's battle against the boss as he can be attacked by monsters that assist the beast.

After three Bombchus, Dongorongo falls down, a bridge appears and Gongoron walks out of the room. However, just as Link crosses the bridge, Dongorongo wakes up, and some of its armor breaks revealing a large blue crystal, which is his weak point. Dongorongo will inhale to breathe fire at Link and when he does this, the hero must throw a Bomb into his mouth. After incapacitating the boss again, Link proceeds to attack his weak point until he stands up again. Repeating this a few times results in the true defeat of Dongorongo.

Dongorongo's name is most likely a cross between "Dodongo" and "Goron" because it possesses the lizard-like body of a Dodongo, and the rock-formations of a Goron. The name is also one letter off from Rongorongo, a mysterious script found on stone tablets on Easter Island, perhaps owing to the tribal nature of the Gorons.