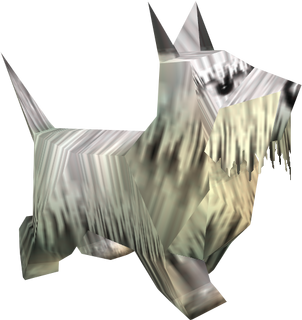 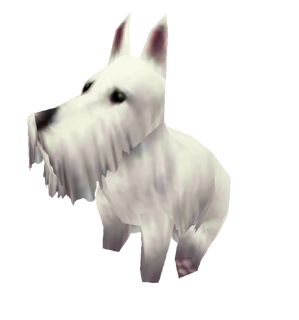 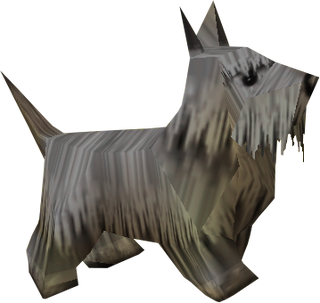 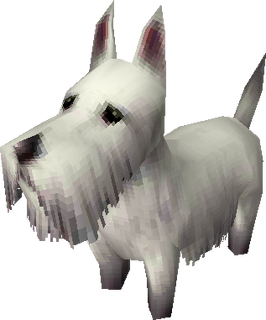 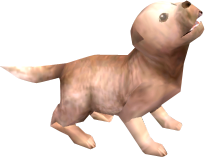 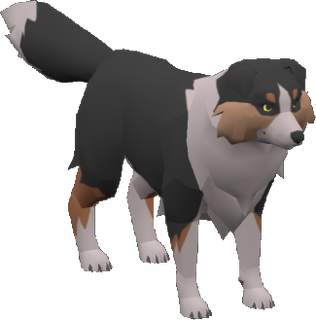 Dogs,[1][name reference needed] also known as Canines,[2] are recurring Animals in The Legend of Zelda series. They usually appear in towns or other populated areas.

Dogs appear as Mutts who roam Mabe Village in Link's Awakening. Treated as enemies, they will attack Link if he attacks them. They can be defeated by using Magic Powder or the Magic Rod. Chain Chomps, animals with Dog-like behavior, also appear for the first time in Link's Awakening as pets of Madame MeowMeow.

Dogs are commonly found running around the Castle Town Market and throughout Castle Town's back alleys in Ocarina of Time. These Dogs are smaller and have shaggy fur, resembling terriers. One particular Dog, Richard, is owned by Mamamu Yan, who holds her Dog in very high esteem compared to the other mutts of the town.[3][4] At night, when all the Dogs roam the town, Mamamu Yan is unable to find hers, and asks Link to go look for him.[5] Richard can be found behind a stall near the entrance to the market. As thanks for returning Richard, Mamamu Yan rewards Link with a Piece of Heart.

After awakening seven years later as an adult in the Temple of Time, Hyrule Castle Town is destroyed by Ganondorf and the Dogs are nowhere to be found. Mamamu Yan will have also moved to Kakariko Village along with the rest of the Hylians. After Link successfully gains Epona and Talon moves back to Lon Lon Ranch, she will mention that Talon reminds her of her Dog, Richard.[6] Since Richard is nowhere to be found, and she refers to him in the past tense,[7] it is implied that Richard died in the seven year period.

The Dogs of Termina are mostly found at the Doggy Racetrack near Romani Ranch, operated by Mamamu Yan in Majora's Mask. In this minigame, Link chooses a Dog from the kennel that he will bet on in a race. By picking up a Dog while using the Mask of Truth, Link can read the thoughts of the Dog.[8] This is especially useful while choosing a Dog for the races. In addition to the white and brown colorations from Ocarina of Time, Dog coats may also be grey, yellow, and blue. Other Dogs include the Dog of the Cursed Rich Man found inside the Swamp Spider House. If Link reads its mind, it will say his master's eyes are always filled with greed.[9] There is also the Dog roaming South Clock Town, who constantly thinks of Deku Link.[10]

It is also mentioned by Guru-Guru that a Dog was the leader of the animal troupe,[11] and wore the Bremen Mask, which Guru-Guru stole.[12]

A Dog named Flash appears in eastern Horon Village in Oracle of Seasons. He can be seen fetching a red ball thrown by his master.

One unnamed Dog appears as the pet of Mamamu Yan in Lynna City in Oracle of Ages. Mamamu Yan still believes her pet to be much cuter than the rest,[13] despite the fact that there are no other Dogs in all of Labrynna. In the Trading Quest, Mamamu Yan will take the Doggie Mask to hide her dog's face, whom she claims is very shy.[14] In return, she gives Link the Dumbbell that the Dog played with.[15] After receiving a secret from Mamamu Yan's mother in a Linked Game of Oracle of Seasons, and telling this secret to Mamamu Yan, she will mention that she has lost her Dog somewhere in town and will ask Link to go find it.[16] The Dog will appear randomly in Lynna City. After finding and returning the Dog (who can be lifted using the Power Bracelet), Mamamu Yan rewards Link with the Snowshoe Ring.[17]

Several Canines appear in The Minish Cap. Fifi is a Canine owned by Stockwell and can be found at Stockwell's House at Lake Hylia. Stockwell claims he is too busy to visit his Canine,[18] and as such he becomes very lonely.[19] Link can bring him a Bottle of Dog Food as a favor to Stockwell, who will let Link keep the Empty Bottle afterwards.[20]

Other, more mutt-like Canines appear in Hyrule Town. One is Rolf, a dark-furred Canine belonging to Romio. The other is Growler, a light-brown Canine, who, in the beginning of the game, blocks a staircase leading to the southwestern part of Town.

While in Minish-sized, Link can speak to Canines and even Fuse Kinstones with Fifi and Rolf.

Dogs can be found in Ordon Village and Hyrule Castle Town in Twilight Princess. Dogs can be picked up and played with. Link can even play fetch with them using bones found lying around, much to the Dog's enjoyment.[21] If the bone is thrown into the patch of Grass next to the Medical Clinic or near a Tree, the Dog may bring back a Green Rupee or a Heart instead of the bone.

Dogs can be spoken to while in Wolf form, and will often give Link helpful advice on his quest. One particular Dog, owned by Jaggle and Pergie's family, gives Wolf Link helpful information as to how to dig and use his senses when he returns to Ordon Village for the first time in wolf form.

Stalhounds, skeletal Dog-like beasts, appear roaming Hyrule Field at night.[22] Link must defeat a pack of Stalhounds in order to recover the Wooden Statue, the key to recovering Ilia's memory.[23] Stalhounds also appear within the Cave of Ordeals.

A Dog named Barkle appears as Tingle's intelligent pet Dog first encountered at Sunshine Seashore in Freshly-Picked Tingle's Rosy Rupeeland. He will fetch Tingle Rupees if he is given Bones.

In certain foreign versions of The Minish Cap, Rolf and Growler are given similar names (ワウ (Wau) and マウ (Mau); these names are onomatopoeias for barking in their respective languages).