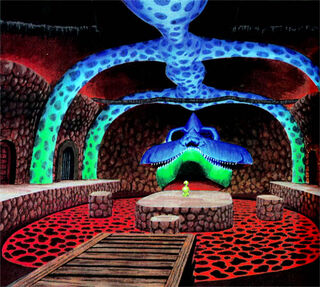 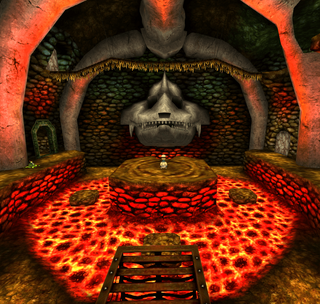 Dodongo's Cavern is a Dungeon in Ocarina of Time.[1] It is the second of three dungeons that child Link must visit in order to acquire the three Spiritual Stones. It also has a great amount of rocks in it that the Gorons that live nearby eat, and it is used for mining food for them.[2]

Entrance to the Cavern

The cave is located about halfway up Death Mountain Trail. Prior to the events of the game, Ganondorf came to Death Mountain to get the Goron's Ruby from Darunia, the chief of the Gorons, who refused. Because of that, Ganondorf infested the cavern with Dodongos and sealed the entrance with a boulder.[3]

Link, who comes to Death Mountain to get the Spiritual Stone as well, is, unlike Ganondorf, able to gain the trust and respect of the Gorons. By using a Bomb Flower (usable only after collection of the Goron's Bracelet)[4] to destroy the boulder blocking the entrance, he is able to enter the cavern and navigate his way through it, defeating the creatures all the way through up to King Dodongo, the boss of the dungeon. In return for this, he is able to receive the Spiritual Stone from the Gorons and proceed with his quest.[5]

Dodongo's Cavern has two floors, some of which include bridges and statues. Some rooms are smaller and darker. Link regularly has to move blocks to depress Switches, use Bomb Flowers to destroy walls (which can also be destroyed by defeating a Baby Dodongo), and occasionally shut off rings of fire by shooting eye switches with the Fairy Slingshot. It is home to lizard-like creatures, such as the several varieties of Dodongos for which the Cavern is named and Lizalfos, which are the first mini-bosses found in the game. A small, hidden room is located behind the lava-waterfall in the chamber where the first two Lizalfos are fought. This room contains a single Heart. Many Bomb Flowers grow within the Cavern and are often necessary for solving puzzles before Link obtains the Bomb Bag. In the main chamber of Dodongo's Cavern lies the remains of a giant dead Dodongo, whose mouth must be opened to progress further into the dungeon.[6]

In the Master Quest version, the dungeon is largely played in a backwards fashion. Instead of going first to the right, Link must go to the left and to the upper floor. The Lizalfos are first fought in the second floor and then in the first. Bombs are obtained much later, where the Compass was originally found. There are also more Business Scrubs. The rooms where Gold Skulltulas were originally found have now many enemies such as Skulltulas and Mad Scrubs, giving a reward of only five Rupees. Poes now appear in the Dodongo room. Baby Dodongos are plentiful and Dodongos are found in a different room. There are almost no Keese and there is a room with several Armos. Most puzzles feature a sequence of Bomb Flowers on the walls.

Caverns in The Legend of Zelda series
Community content is available under GNU Free Documentation License unless otherwise noted.
Advertisement